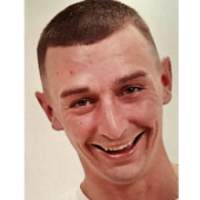 He was born in Burlington on August 10, 1985, son of Jacques and Jill (Buttendorf) Robitaille.

James grew up in Montgomery and attended school at Montgomery Elementary, BFA St. Albans, and Enosburg Falls High School. James was an amazingly hard worker. He started his first job at the age of 17 working with his dad logging and tree service. He then went on to snowboard instructing at Jay Peak, sugaring for Jesse Soule, construction for both St. Onge and Desroches, and many other side jobs. He was known for working from dawn till dusk to be able to provide for his family, but he worked even harder at being a dad. He always said the moment he became a father was the moment his life was saved. His drive to make sure his children were provided for made his ability to push through life unmatched by any other.

James always saw the good in people, this was a treasured gift he possessed. At any given time he would be willing to help whomever needed him, his kindness and thoughtfulness touched so many lives and hearts. James passions in life were horse pulling with his family, dirt biking, snowboarding, and snowmobiling with his friends. He was always on the go, full throttle you could say. James enjoyed hunting, fishing, and attending church, but most of all James enjoyed spending time with his children, they were his world and first true love.

His amazing laugh and infectious smile would light up the darkest of times and will be treasured in our hearts forever, but he will be remembered most for his love and drive to make sure his children had the best life!!

For those who wish, contributions in James memory may be made towards a fund for his children, c/o Spears Funeral Home, P.O. Box 396, Enosburg Falls, VT 05450.

Condolences, photos and favorite memories may be shared through www.gossfs.com
To order memorial trees or send flowers to the family in memory of James C. Robitaille, please visit our flower store.