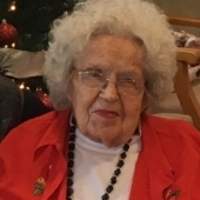 SAINT ALBANS - Jeannette A. Bruley, after 100 wonderful years, joined her husband and daughter in eternal rest on Saturday, December 29, 2018 at the Holiday House in St. Albans.

Jeannette defined the role of a homemaker, she was an excellent cook, housekeeper, gardener, and a loving mother, grandmother, great grandmother, and great great grandmother. She was active in her community and belonged to several organizations including, Holy Angels Catholic Church, Ladies of St. Anne, American Legion and V.F.W. Auxiliaries, and the Red Hat Society. She volunteered at blood drives and rummage sales at Holy Angels and was also a Volunteer at Northwestern Medical Center for several years. Jeannette loved to be social, and to her, a stranger was just a friend she didnt have a chance to meet yet.

Jeannettes family would like to thank the staff at Holiday House for the excellent care she received during her stay.

The Mass of Christian Burial will be held on Wednesday, January 2, 2019 at 10:00 AM at Holy Angels Catholic Church, 241 Lake St., St. Albans. Jeannette will be laid to rest with her husband in Jerusalem Cemetery in North Hero.

Condolences, photos and favorite memories may be shared through www.gossfs.com
To order memorial trees or send flowers to the family in memory of Jeannette A. Bruley, please visit our flower store.