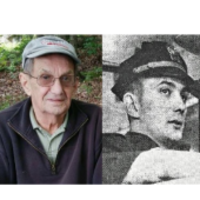 He was born on April 6, 1935 in St. Albans, Vermont to George Reginald Rugg and Bernadine (Sullivan) Rugg.

He grew up on the family farm where he developed a lifelong love for all creatures and the outdoors. He attended St. Marys School in St. Albans before becoming a Deputy Sheriff under John Finn in Franklin County as well as serving in the Vermont Army National Guard as a squad Sergeant and part time barracks Sergeant. He joined the St Albans City Police Force in 1958. In 1960, he was hired as Police Chief in Vergennes, Vermont making him the youngest Police Chief in the United States. In 1963, he returned to the St. Albans police force until 1966 when he became General Manager for Century Arms Incorporated. He enjoyed travelling the world making many friends internationally for over 30 years. Following his retirement, he held various positions in security and support for several different businesses in Vermont. He will be remembered as an avid outdoorsman. He was most happy when he had his dog and a fishing rod or a gun at his side. Jack loved to share a joke or a humorous story from his many life experiences. His humble attitude and sense of humor was appreciated by all who truly knew him. His willingness to serve as well as his kindness and compassion have left an inspiring living legacy for his family and friends.

Jack was a past member of the Vermont Police Association, the New England Association of Chiefs of Police, and the National Police Chiefs Association. He was also past Exalted Ruler for the B.P.O.E. Lodge #1566 in St Albans. He was a member of the Green Mountain Post #1 American Legion of St Albans for over 20 years. He also has served on the St. Albans Town Police Commission.

Jack is survived by his wife of 60 years, Cynthia (Rublee) and their three children: Deborah Newton (Basil), Rebecca Valcour (Andre), and Robert (Mindy), as well as four grandchildren: Benjamin Newton, Geoffrey and Daniel Valcour, and Mollie Rugg, his sister Patricia Ann Rugg, and brother-in-law William B. Rublee along with several nieces, nephews, and cousins. He was preceded in death by his father and mother, as well as his siblings Robert, Thomas, and David Rugg, and Grandparents, Mr. and Mrs. William Rugg and Mr. and Mrs. Henry Sullivan, as well as several aunts and uncles.

In lieu of flowers, memorials may be made to the Franklin County Home Health Agency, Inc., Rugg Johnson Fund, 3 Health Circle Drive, St Albans, VT 05478 or at http://www.fchha.org/support-our-work/the-rugg-johnson-fund/.

Condolences, photos and favorite memories may be shared through www.gossfs.com
To order memorial trees or send flowers to the family in memory of John "Jack" J. Rugg, please visit our flower store.