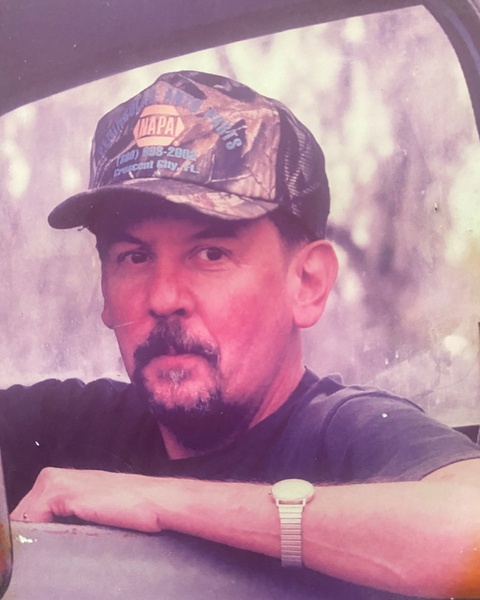 John was born in Burlington, Vermont to the late Lawrence and Audrey (Sabourin) Rushford.

John grew up in Franklin County and graduated from BFA, St. Albans in 1974. He met, fell in love with and married Laurie (Yandow) at Holy Angels Catholic Church in St. Albans in 1979. He worked for Home Plate Restaurant in St. Albans, City Auto which became FC Parts and Performance in St. Albans, Maynard’s Auto Parts in Burlington and for NAPA Auto Parts in Crescent City. John and Laurie formed a second family in the Crescent City area upon moving to Florida in 2005. He was a volunteer fireman in Fairfield, and he was affiliated with All Saints Catholic Church. In his spare time, he enjoyed painting and working on cars and riding motorcycles. He loved NASCAR, especially Chase Elliott. He and Laurie looked forward to driving their RV to Vermont and Kentucky to spend summers with their families. Amelia and Tyler will always cherish spending summers and making memories with Grandma and Grandpa.

He is survived by his wife of 43 years, Laurie Rushford; his sons, John Rushford and his wife Codie of East Fairfield, Vermont, and Paul Rushford and his husband James Watson of Louisville, Kentucky; grandchildren, Amelia, and Tyler Rushford; nephews, Ronnie Rushford Jr. and his wife Kendra, and Blaze Rushford; a sister-in-law, Patty Sifford; mother-in-law, Marie Matte Yandow; brothers and sisters-in-law, Linda Michaud, Peter Yandow, Sylvia Lussier, Lou-Ann Shappy, Jerry Yandow, Caroline Ashley and all of their spouses; and several cousins and very special friends. Besides his parents, John was predeceased by his brother, Ronnie Rushford; a special aunt, Katie Lawyer; and a dear friend, Steve Lawrence.

Family and friends are invited to John’s Life Celebration events to include visitation on Saturday, October 1, 2022 from 12-2:00 PM with a funeral service to take place at 2:00 PM at the Goss-Spears Life Celebration Home, 96 Dickinson Ave., Enosburg Falls, VT. Interment will immediately follow in the All Saints Catholic Cemetery, VT Route 105, Richford, VT.

For those who wish, contributions in John’s memory may be made to the Franklin County Animal Rescue, 30 Sunset Meadows, St. Albans, VT 05478 or the Fairfield Volunteer Fire Department, 4964 VT-36, Fairfield, VT 05455.

A Celebration of Life will be held for John in Crescent City, Florida, with service details to follow.

To order memorial trees or send flowers to the family in memory of John D. Rushford, please visit our flower store.