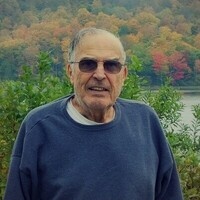 Jon was born on May 15, 1937 in Richford, VT to Walter and Donna (Scott) Magoon. He graduated from Richford High School in 1955.  He attended Springfield College in Springfield, Massachusetts for two years where he was on the wrestling team. He then joined the Army to serve his country in 1957.  While he was stationed in Puerto Rico and working as a lifeguard on the beach, he met the love of his life, Maria Delgado.  They were married in Puerto Rico on October 22,1960 and subsequently moved to Enosburg, Vermont. There they raised two sons, Mark and Lance, and one daughter, Jean. Jon worked with his father on the family farm initially, and then Jon worked as a rural route carrier for the postal service for almost 40 years before he retired.

Jon had a passion for sports. He loved baseball the most, and coached Little League for 18 years. He loved it when grown men would approach him and tell him how fondly they remembered those childhood days spent with him on the baseball field. He also coached high school sports throughout the years, namely boys baseball, basketball and girls basketball. He enjoyed participating in horse shoe tournaments with his friends, going to hunting camp and taking care of his garden. He was known for his good nature, his sense of humor, his infectious smile, and his kind and compassionate spirit. Jon had a strong sense of community and serving that community was important to him. He volunteered at the Food Shelf for years, and delivered food for the elderly for Meals on Wheels as well.

Jon was preceded in death by his father, Walter, and his mother, Donna (Scott), his twin sister Jean, his wife Maria, and his son, Lance. He is survived by his brother, Charles Douglas Magoon, his son Mark Magoon and his wife, Jeanne, and his daughter Jean Otto, as well as his three grandchildren, Dylan Magoon, Carly Magoon and Devin Otto. An Open House will be held on Saturday at Spears  Funeral Home on 96 Dickenson Avenue from 3:00 to 6:00 o’clock p.m. Donations may be sent to the Enosburg Ambulance Service, P.O. Box 465, Enosburg Falls, VT 05450, in lieu of flowers.

To order memorial trees or send flowers to the family in memory of Jon B. Magoon, please visit our flower store.