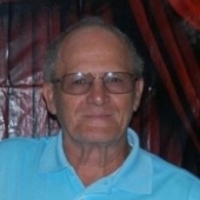 ENOSBURG FALLS - Kenneth Kenny Cook, age 79, passed away in the comfort of his home and in the presence of loved ones on Sunday, November 18, 2018 in Enosburg Falls.

He was born July 19, 1939 in St. Albans to the late Mary Cook-Beyor and raised by his late grandparents, Richard & Norma Cook.

Kenny was raised and attended school in Highgate and later earned his GED. He married Donna (Foote) Cook on July 21, 1967, and the two raised their family in Enosburg Falls, where Kenny lived most of his life. Kenny worked at many places throughout his life including; several farm operations, the Sheldon Pulp Mill, General Electric for 23 years, Bonneau Machinery, and the St. Albans Co-Op where he retired after 13 years. He was known for being a master of all trades, he could make or fix anything. Kenny enjoyed the time he spent on his motorcycle, camping with his family at Brookside Campground, rooting for his favorite NASCAR drivers: #3 and #88, playing dominos and Skip-Bo, baking donuts and pies, working outside, and puttering in his shed. His greatest joy in life was spending time with his family and he was a loving husband, father, grandfather, brother and friend.

He is survived by his wife of 51 years, Donna Cook of Enosburg Falls; their daughters, Melinda Gilman and her husband Ted of Highgate, and Ann Marie Ashton of Enosburg; grandchildren, Caleb Gilman and his fianc Ashley Maiolo, Seth Gilman and his significant other Kim Kosac, Kenneth Ashton, and Lillian Ashton and her significant other Gavin Baker; his siblings, Gordon Beyor and his wife Pauline of Alburgh, Sandra Daniel and her husband Ed of Swanton, Avery Beyor and his wife Connie of Highgate, and Arvis Beyor and his wife Helen of Highgate; brother-in-law, Randall Sheperd of Enosburg; sisters-in-law, Terri Foote and her fianc Max Wilcox and her son Kyle Kittell of Sheldon, and Debbie Foote of Richford; special friends, Bobby Tipper and his wife Rita, and Jimmy Tipper and his wife Debra; and several cousins, nieces, and nephews. Besides his mother and grandparents, Kenneth was predeceased by his in-laws, Harold Sr. and Virginia Foote; his son-in-law, Wendall Ashton; brother-in-law, Harold Foote Jr.; sister-in-law, Sheila Sheperd; several aunts and uncles; and his beloved four-legged companion, Babe .

Condolences, photos and favorite memories may be shared through www.gossfs.com
To order memorial trees or send flowers to the family in memory of Kenneth "Kenny" Cook, please visit our flower store.