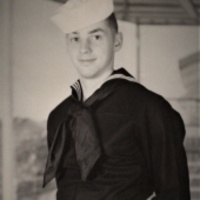 ENOSBURG FALLS - Kenneth Bud A. Wells, age 90, passed away on Wednesday, July 1, 2020 surrounded by his loving family at his home in Enosburg Falls.

He was born March 24, 1930 in Bakersfield to the late Kenneth & Jessie (Philips) Wells.

Bud enlisted in the U.S. Navy immediately after high school. He was proud of his service on the U.S.S. Charles R. Ware, and his service was highlighted by travelling into the Arctic Circle and serving during the Korean War. He met the love of his life, Janet (Montgomery) while home on leave. They were married on August 9, 1950 and had five children together. Bud held several positions throughout his career; he worked as a food processor for H.P. Hood, as a mechanic for the Shover family, and as a machine operator for Fonda. He retired from Fonda in 1995, and later went on to drive bus for Fairfield School, retiring when he was 80. His favorite hobbies included gardening, reading westerns & mysteries, dancing with Janet, and playing horseshoes and poker.

Bud was a family man through and through. He worked hard, two jobs most of the time, to support his family. He cherished his wife, his children, grandchildren and great grandchildren. In fact, his last smile came as he saw his great granddaughter. Bud was truly lost when his beloved wife Janet passed away, but they are now reunited again. He will be remembered for his famous peanut butter fudge, and apple pie.

A graveside funeral service will be held Friday, August 7, 2020 at 10:00 AM at the Sheldon Village Cemetery, Sheldon Woods Rd., Sheldon.

For those who wish, contributions in Buds memory may be made to the Cystic Fibrosis Foundation, Memo: Baker Boys Battalion, 655 West Hollow Court, Roswell, GA 30075 or to Franklin County Animal Rescue, 30 Sunset Meadows, St. Albans, VT 05478.

Condolences, photos and favorite memories may be shared through www.gossfs.com
To order memorial trees or send flowers to the family in memory of Kenneth "Bud" Wells, please visit our flower store.