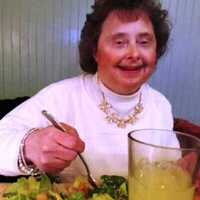 From the moment she was born Kimberly has beat the odds. She was born in Newport on April 2, 1964 to Steven & Linda (Leach) Pike. Steven was 17 and Linda was 16 at the time, both too young, or so they thought. Kimberly was born with Down Syndrome and her parents were urged to send her away to live. There was no place for her in this world, or so they thought. Kimberly went on to live not only a good life, but an exceptional one that inspired so many people around her.

She graduated from BFA St. Albans with the class of 1985. While in school, she competed on the gymnastics team, and became the poster child for the 1981 Winter Special Olympics at Smuggler’s Notch. She traveled more than most and enjoyed trips to California, London, and Disney World. With a great deal of help from her friends Ellen Rose and Sandy Scott, Kimberly had a fulfilling career as a Teacher’s Aide at the St. Albans City School. She also worked at Verdelle Village for several years. Through her work, she was able to provide a positive impact to so many students, teachers, and colleagues. Kimberly’s life was a gift to everyone that had the pleasure of knowing her.

Kimberly’s family would like to thank everyone that helped care for her over the last several years especially Dr. Corrigan and his staff, Bayada Home Health nurses Jenyca Chapman and Cheryl DeCelle, and Missisquoi Valley Rescue.

Friends and family are invited to Kimberly’s Life Celebration on Friday, January 7, 2022 at the Goss Life Celebration Home, 89 Grand Ave., Swanton, VT to include visitation from 12-2:00 PM followed with a funeral service at 2:00 PM. Interment will be held next spring in the Irasburg Cemetery.

For those who wish, contributions in Kimberly’s memory may be made to the Alzheimer’s Association, 225 N. Michigan Ave., Fl. 17, Chicago, IL 60601.

To order memorial trees or send flowers to the family in memory of Kimberly J. Pike, please visit our flower store.