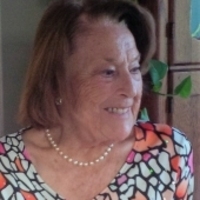 ENOSBURG FALLS, VT - On Monday January 22nd 2018, Kitten Ellison, age 85, of Enosburg Falls Vermont, former resident of Bermuda and the UK, passed away peacefully after a long valiant fight against cancer. She was born April 29, 1932 in Manchester England, daughter of Doris and Clifford Wilkinson.

She completed her training at the Cone Ripman School, (renamed Tring Parks School for the Performing Arts) in London. She sang and danced professionally in Londons West End for a number of years, where she was in the original Guys and Dolls production. She was also in numerous shows, a few films, and worked in Holland as an actress. Later in life, she became an independent artist. She was a master Sogetsu Ikebana teacher and started Bermudas Ikebana chapter. She was an avid gardener, and international flower judge. She exhibited her own Ikebana arrangement internationally and did arrangements for the Queens visit to Government House Bermuda. She was also a Sumi painter and jewelry maker. She founded several artisan markets both in Bermuda and Vermont.

Gardens, especially her roses, were her passion in England, Bermuda and Richford. She was President of the Garden Club, and co-founder of the Bermuda Festival of Performing Arts. She served the Bermuda National Trust and was involved in the Bermuda Musical Dramatic Society. Kitten directed numerous nativity plays and a show called Alice in Onion Land. She was consummate hostess, and a fundraiser. She was a devoted Christian and church member of St Matthews Episcopal church where she served as secretary and on the altar guild. Kitten loved doing the church flowers.

Kitten was predeceased by her first husband, John Anthony Ellison,the father of her four children; and predeceased by her second husband Michael Harries. She is survived by her daughters and their spouses, Victoria Ellison of Bermuda, Melanie Ellison & Hugh McGugan of Canada, Claudia & Richard Hill of UK, and Samantha & Tom Kane of USA. In addition, she leaves behind her step children Phillipa, Joanna, David and their families of Canada.

She is survived by grandchildren, Hannah and her husband, Chris Andrew, James and Tom Hill, Camilla and Mark McGugan, Zoe Kane and great grandchildren, Talia and John Andrew. She is also survived by her brother Claude Jeffrey Wilkinson of UK and predeceased by brother Peter Wilkinson and his son, Peter Jr. She also leaves her nephews Craig, Jonathan, Mark, and her niece Michelle Wilkinson of UK and their families.

A Memorial Service will be held on February 3, 2018 at 2 p.m. at St Matthew\u0027s Church, 323 Church St, Enosburg Falls, VT 05450, USA. In lieu of flowers, donations may be made to St. Matthews, P.O. Box 276, Enosburg Falls, VT 05450 or to the Bermuda National Trust, Waterville, 2 Pomander Road, Paget PG05, Bermuda or on-line at https://bnt.bm
.. 2 Pomander Road,
Condolences, photos and favorite memories may be shared through www.gossfs.com
To order memorial trees or send flowers to the family in memory of Kitten B. Ellison, please visit our flower store.