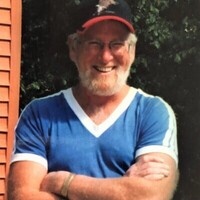 Larry grew up in Fairfield and Enosburg and graduated from Enosburg Falls High School. In his younger years, he enjoyed riding his snowmobile, motorcycle, and cruising in his Barracuda. Larry was a hard worker and began working at the Gregoire Sawmill right after graduation, which transitioned into a firewood and logging business. He developed a passion for trucking in 1980, established Gregoire Trucking and retired after over 30 years. Larry was meticulous and detail oriented— he had the ability to sort logs in an instant, kept every blade of grass on his lawn in line, and maintained all his equipment in almost mint condition. His pride and joy was his garage and the meeting place for friends and family, there he was able to fix, paint, and restore almost anything, it was truly his happy place. When he wasn’t working on something, which was rare, he enjoyed spending time with his longtime companion Barb, taking care of her horses, and going to horse shows. Larry will be remembered most for his kind heart.

He is survived by the love of his life and significant other of over 22 years, Barb Trombley of Sheldon; siblings, Patrick Gregoire and his wife Patricia of Enosburgh, Wayne Gregoire and Joanne Longe of Enosburg, and Tawnya Croft of Marysville, WA; brother-in-law, Arthur Rocheleau of Georgia; beloved nieces and nephews, Colleen Gervais and her husband Clement, Shawn Gregoire, Patrick Gregoire and his wife Josie, Jason Gregoire, Jessica Goss and her husband Josh, Matthew Gregoire, Nicole Gregoire, Caitlin Symington and her husband Scott, Heidi Croft, and Logan Croft and his wife Sylvia; great nieces and nephews, Allison, Emily & Megan Gervais, Kody Gregoire, Kaden & Reagan Goss, Camden Gregoire, Amelia & Theodore Croft, and Rosalie Walters. Besides his parents, Larry was predeceased by a brother, Francis Frank Gregoire; a sister, Annette Gregoire; and his loyal co-pilot and four-legged companion, Sara.

In keeping with the family’s wishes, Larry’s services will be held privately at the convenience of the family.

Larry loved animals, for those who wish, contributions in Larry’s memory may be made to the Franklin County Animal Rescue, 30 Sunset Meadows, St Albans City, VT 05478.

To order memorial trees or send flowers to the family in memory of Larry A. Gregoire, please visit our flower store.