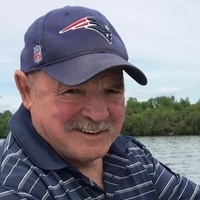 It is with extreme sadness that we announce the passing of Larry Lionel Tatro, age 74, of Franklin, Vermont. He lost his battle with Dementia and Alzheimer’s on February 16, 2022.

Larry was the life of the party and a friend to all; he was loved by babies, animals, and all who could sense his genuine good heart. He had the unique ability to make every person who crossed his path feel special. He will be missed by so many.

Larry had many hobbies including golfing, fishing, but most especially he was a passionate and accomplished hunter. He loved hunting in Vermont, alongside many of his hunting buddies. In addition to his local hunts, he enjoyed traveling to other locations. He spent time in Iowa, Texas, Maine, Colorado and Ontario as well as many other places. It did not matter what type of animal Larry was pursuing, deer, elk, rabbit, turkey, wild pigs, etc. he just enjoyed being in the woods and the comradery that came with it. Larry proudly displays his trophies in a room at his home in Franklin dedicated specifically for this purpose.

Larry was born on November 17, 1947, to Gordon “Bud” and Lottie (LaPlant) Tatro of Richford, Vermont. He spent his early years working alongside his brothers, sisters, and parents at the family snack bar, Bud’s BBQ. He also volunteered for the Richford Ambulance Service with his dad and brothers. At 17, the day after his high school graduation, he started his career as a “telephone man.” He was a dedicated and committed lineman and spent 38 years with Verizon (formerly NYNEX). Following Larry’s retirement from Verizon, he found odd jobs here and there just to get out to see and meet people. The Enosburg Country Club and delivering parts for O’Reilly Auto Parts (formerly Bond Auto Parts) served that purpose well.

In 1974 Larry’s favorite and most important job of his life began when he became Dad to his eldest daughter Kristi.  This started his journey of being the proudest original “Girl – Dad”. Three more girls followed, one every 2 years. He held his title of “DAD” to Kristi Lee, Kari Lynn, Kyli Lise and Kati Lane, above any other. He was always there, never missing a single event, a single phone call, or a single opportunity to spend time with his girls.  He turned each of their passions into his own. He loved his animals and his grand-animals and was always willing to help rescue those in need. In 2014 he became “Grampy” and he held that title with as much enthusiasm and commitment as he did “Dad.”  His grandchildren, William (7), Nathan (4), Hailey (3) and Summer (1) became his next generation of pride and joy. He was always the first to jump into any dance party, fishing event, boating adventure, etc., and he would do so with belly laughter from anyone fortunate enough to witness these interactions.

In 1984, Larry met his wife, Kari. She was his companion and best friend, his “in sickness and in health until death do us part” person.  They shared an amazing life of raising their girls, traveling, driving around back roads looking for deer, shooting, boating, golfing and simply having fun. Together they had the ability to bring smiles to anyone in their presence, usually because they acted younger and sillier than anyone around them.

Larry and Kari along with the girls’ mother, Brenda and step-father, Albert Desrochers were shining examples of how to live a life that exemplified the commitment of parenting children. The four of them parented in lock step, respecting one another and ensuring that their girls always came first.

Larry had many friends, and if you were a friend of Larry’s, you were like family.  He was dedicated to you and would give you the shirt off his back even when you didn’t need it.  Larry was blind to age: his friendships transcended generations and saw no bounds.

Larry was preceded in death by his parents, Gordon “Bud” and Lottie Tatro, his brother Gordon Tatro, and his sister Beverly and brother in law Robert “Bert” Martin.

In lieu of flowers, we ask that you please live like Larry. Have fun. Say yes more often than no. Hand out $2 bills to children whenever you can. Wave to a dog. Take a young kid hunting. Love with everything you have and be kind always.

To order memorial trees or send flowers to the family in memory of Larry L. Tatro, please visit our flower store.