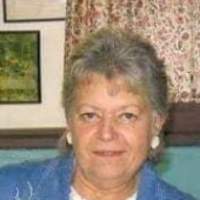 GRAND ISLE - Lois M. Terry, age 74, passed away on Monday, December 24, 2018 at the University of Vermont Medical Center in Burlington.

Lois was born and raised on the family farm in Grand Isle. She married Charlie, the love of her life, in September of 1963. Lois and Charlie were known for their incredible ability to dance, especially to Walk of Life by Dire Straits. She found great joy in watching her two sons and grandsons race stock cars at Airborne Speedway. Lois will be remembered for her loving nature and great cooking skills.

A Mass of Christian Burial will be held on Monday, December 31, 2018 11:00 AM at Saint Josephs Catholic Church, Grand Isle, VT. Interment will be held in the spring in Grand Isle Cemetery.

For those who wish, contributions in Lois memory may be made to the University of Vermont Cancer Center, The Courtyard at Given, 4th Floor North, Burlington, VT 05405.

Condolences, photos and favorite memories may be shared through www.gossfs.com
To order memorial trees or send flowers to the family in memory of Lois M. Terry, please visit our flower store.