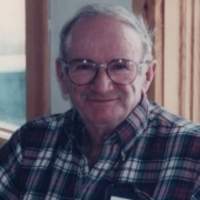 RICHFORD - Lyle Francis Hurtubise, age 95, passed away on Sunday, August 4, 2019, surrounded by his loving family at his home, on the farm in Richford.

He was born in Richford on June 27, 1924, the son of the late August and Jessie (Donlon) Hurtubise.

Lyle was a lifelong resident of Richford, graduating from Richford High School in 1943. After graduation he joined the Army, and participated in the invasion of Normandy, landing on Utah Beach, June 6, 1944, D-Day H hour. He also participated in the 25th and 50th anniversary of D-Day in Normandy, France; He was proud to tell everyone he shook hands with President Bill Clinton at the 50th anniversary of D-Day.

On February 15, 1950, he married the love of his life, Dora Hurtubise. He was the proud owner and operator of L.F. Hurtubise & Sons Dairy Farm and Sugaring Operation since 1946. Lyle was a member of the American Legion Post #12 for 73 years. He served on the Select Board for the town of Richford for 13 years and served on the ASCS (Agricultural Stabilization Conservation Service) for 30 years. He was awarded the Green Pasture Award for Dairy Farms in New England. He was an active parishioner of All Saints Catholic Church.

He had a love for the land and enjoyed going for long walks on his farms. In early spring, we were convinced that sap ran through his veins. Lyle instilled in his family the importance of treating others with kindness and having a good work ethic, a trait he admired in others. He had a strong faith in God, which carried forward into his family life, always saying Grace for family celebrations, which we all cherish. When he was not working, he was traveling the world and sharing memorable moments with Dora. He truly enjoyed spending time with his Children, Grandchildren and Great Grandchildren.

A Mass of Christian Burial will be Saturday, August 10, 2019 at 11:00 AM at All Saints Catholic Church, Main St., Richford. Interment will follow in All Saints Cemetery.

Condolences, photos and favorite memories may be shared through www.gossfs.com
To order memorial trees or send flowers to the family in memory of Lyle F. Hurtubise, please visit our flower store.