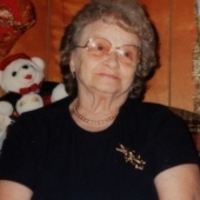 She was born June 9, 1922 in Willsboro, NY to the late William and Josephine (Vashaw) Bigelow.

Margaret grew up in New York and then went on to live in several different places including; numerous Vermont locations, St. Petersburg, Florida, and recently Lewis, NY. She was a caretaker for most of her life. Margaret enjoyed cooking, baking, watching her neighbors go by, crocheting, collecting porcelain dolls, camping, but most of all, spending quality time with her family. She will be remembered for her ability to always put others first.

A graveside service will be held at the familys convenience at the New Bert Cemetery, in Whallonsburg, New York.

For those who wish, contributions in Margarets memory may be made to the American Cancer Society- Northern New England Region, 55 Day Lane, Williston, Vermont, 05495.

Condolences, photos and favorite memories may be shared through www.gossfs.com
To order memorial trees or send flowers to the family in memory of Margaret V. Peeters, please visit our flower store.