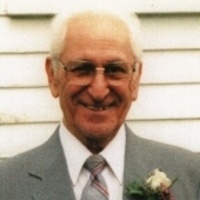 Mike was born on December 15, 1925 in Bridgeport, Connecticut, the son of the late Vito and Caroline (Mancini) Celentano. Mike was employed for many years as a professional painter. While living in California, Mike met the love of his life, Louise. They were married on September 1, 1961 in Compton, CA. Always working together, they spent 20 years managing numerous apartment complexes in Southern California. In 1989 they moved to Montgomery, Vermont to be near their daughter, Lois, and her family. They built their dream house in Montgomery, only to lose it in the historic flood of 1997. They later moved to Enosburg Falls, where they have lived since 1998.

Mike enjoyed much in his life, especially time spent with his family. Mike was a talented artist, giving away many of his precious oil paintings and carvings to family and friends. He enjoyed camping with Louise in Seven Oaks, CA, dancing, deep sea fishing, and smoking a good cigar. Mike was also an excellent cook. He took pride in carving up the holiday turkey, making homemade soups and bread. He looked forward each spring to planting and later harvesting fresh herbs and vegetables from his garden. Mike was a master of many skills, including plumbing, electrical work, and even being a locksmith.

Mike is survived by his wife, Louise (Willis) Celentano of 57 years; a daughter, Lois Chauvin and her husband, Roger, of Montgomery Center; a granddaughter, Therese Chauvin of Swanton; a grandson, John Witherspoon and his wife, Allison, of Montgomery; five great grandchildren; a sister, Dorothy; and several nieces and nephews. Besides his parents, Mike was predeceased by his brother, Armand and three sisters, Ida Piccol, Maffey Squillante, and Louise Direnzo.

Funeral services will be held at 11:00 am on Saturday, October 27, 2018 at St. Isidore Catholic Church in Montgomery Center. There will be no visiting hours.

For those who wish, contributions in Mike\u0027s memory may be made to St. Isidore Catholic Church.
To order memorial trees or send flowers to the family in memory of Michael Celentano, please visit our flower store.