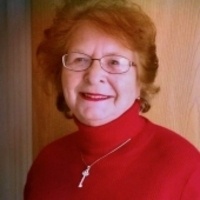 She was born in Bellow Falls, on February 2, 1942, to the late Ruth (Bingham) Hazeltine and Donald Titus, and was adopted by the late Joshua and Louise (Deavitt) Flanders as an infant. She was the only child of her very loving adoptive family. She was able to reconnect with her birth family in adulthood and remained in touch with all of her family, birth and adoptive.
She grew up living in St Albans Bay and worked at the Bay Bowling Alley. From there, she moved to Fairfield Pond for many years, until finally settling in Swanton for the last 22 years of her life.

Patricia waitressed at Burnells, now The St. Albans Diner, and loved her customers. From there she moved into retail, working at Grants and then Woolworths, giving her the skills to open her own store, with her daughter Paula, Pats Variety Shop. In between her full-time jobs, she was an Avon Representative where she had many loyal customers, some who became longtime friends. Her last few years before retirement were spent working at Swanton Rexall.

Anyone that knew her, would say that her main hobby was crafting! From sewing, to doll making, crocheting and anything in between. There was no craft that she wasnt willing to try. She attended many craft shows in Swanton and Highgate. She also enjoyed teaching her love of crafts to her grandchildren. In addition to crafts, she had a love for dancing and enjoyed going out with longtime friends Gerald and Shirley Perry. She had a spunky personality that no one will likely forget.

She is survived by her children, Dureen Weston and her companion George, Kevin Benjamin, Kirk Benjamin and his wife Christine, Paula Benjamin and her Fianc Bob. 8 grandchildren, Josh Weston, Tina Weston, Nicole Latimer, Michael Benjamin, Kelly Forshay, Sean Benjamin, Patti-ann Williams and Travis Stetson. As well as 12 great grandchildren and a number of biological siblings. Patricia was predeceased by Ex-Husband Roger Benjamin, whom she resided with until his passing in 2014.

Due to these difficult times, the family will not be having a public service. A home gathering will be held at a later date.

Condolences, photos and favorite memories may be shared through www.gossfs.com
To order memorial trees or send flowers to the family in memory of Patricia G. Benjamin, please visit our flower store.