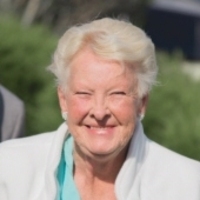 She was born on June 3, 1942 in Woburn, Massachusetts the daughter of the late Albert E. and Anna Marie (Gaudette) Barton.

Patricia spent most of her life living in New Hampshire, raising her family and working as a hair stylist at her shop, Patty Ray Hair Salon. She took great pride in working at the Pelham Inn decorating cakes. Patricia moved to Alburgh last year to be closer to her beloved sister. Patricia enjoyed caring for her beloved four-legged friends, crocheting, embroidering, and was known as an expert seamstress.

She is survived by her two sons, Marc Loiselle and his significant other, Tracy Lirette of Londonderry, NH, Mike Loiselle of Derry NH; grandchildren, Camron Loiselle and Shawn Loiselle and his wife Jenny all of Derry, NH; daughter-in-law, Lisa Loiselle of Derry, NH; sisters, Geraldine and her husband Robert Boumil of Alburgh, Dolores and her husband Albert Asmega of Sugarland TX; brother-in-law, Richard Beaurgard of Enfield, MA; special friends, Marilyn and Peter Foley and many nieces, nephews and cousins. Besides her parents, Patricia was predeceased by her husbands, Raymond Loiselle and Robert Johnson; brother, Albert T. Barton; sister, Dorothy Beauregard; and niece, Debbie Clear.

A graveside memorial celebration will be held at Gibson Cemetery, Pelham, NH after the holidays and at the convenience of her family.

For those who wish, contributions in Patricias memory may be made to the Meridian Masonic Lodge,
58 S Main St, Franklin, NH 03235.

Condolences, photos and favorite memories may be shared through www.gossfs.com
To order memorial trees or send flowers to the family in memory of Patricia A. Johnson, please visit our flower store.