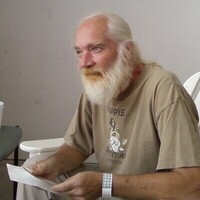 Paul was born on July 22, 1952 in Rutland, Vermont. Within a few months after his birth he was adopted by Gaetan and Anna Boudreau of Swanton.

Gaetan and Anna provided Paul with a very loving home and extended family and instilled many of the qualities that made him the fine person he grew up to be. Paul had an impeccable sense of ethics and honesty (sometimes to a fault), but Paul’s best quality was his outgoing personality and ability to make friends. As a child Paul attended schools in St. Albans and Swanton graduating From Swanton High School in 1970. In his early years Paul had a strong work ethic. Employed by Aubuchon Hardware Co. he managed the Winooski store, then pursued a career in realty.

He joined a Danish international peace group and was sent to Mozambique during their civil war to better the lives of the Mozambique people. Paul’s real passion was for travel, touring most of the United States, with several trips to Central America, Africa and Europe. Never traveling as a tourist, he shunned the “tourist traps” and would live with common people as much as he could. Paul also had a love for cars and music. Even after he was struck with illness he was always looking for his next adventure.

Paul leaves behind his brother Pierre and friend Kim Wells of Enosburg, his nephew Nicholas Boudreau of Biloxi MS, a special first cousin Carman Crepeau of St. Albans, lifelong friends Marc & Rose Boucher of St. Albans and Frank Read of Georgia, many cousins and special friends he made over the years. He was predeceased by his parents Gaetan and Anna Boudreau of Swanton.

Till we meet again Paul, God speed. We will see you on your next adventure.

A celebration of life will be held at a later date.

Those that wish to contribute in Paul’s memory may do so in his name to the association of your choice.

To order memorial trees or send flowers to the family in memory of Paul A. Boudreau, please visit our flower store.