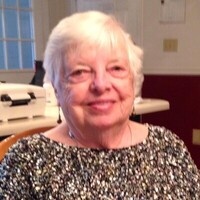 She was born in Notre-Dame-de-Stanbridge, Quebec on August 26, 1926 to the late Adrien & Armande (Dion) Galipeau.

Pauline married Richard Sheets in 1952. Several years after their marriage they moved to San Diego, California and eventually settled in the San Francisco Bay Area. After their children were in school, Pauline started a career at JC Penney in the Linen Department and worked there until she retired. Although living so far from her home in Canada she managed to visit most summers until the kids were in their teen years. After Richard’s passing in 1992, Pauline decided to move back to Swanton, Vermont the birthplace of her husband, to be closer to her family roots. While living in Swanton she met and married George Swann and enjoyed a few years together before his passing. Pauline was a natural caregiver. She had a huge heart and did all she could to help those she loved. After retirement she found joy in life’s simple pleasures. She adored her children and grandchildren and spent as much time with them as possible. Pauline was a fierce competitor at cards and 500 was her game of choice. She also loved Word Search Games and later discovered Adult coloring books. In later years Mom met Homer Paradis at the senior center. They enjoyed days of long country drives together until they were no longer able to drive. Every Saturday, Debbie, Homer’s daughter would drop him off so they could spend a couple of hours visiting together.

She is survived by her children, Marielise Claudia Jagels of Oakland, CA, Michael Sheets, and his wife Sandra of Portland, OR, and Angel (Shawn) Sheets of Hayward, CA; grandchildren, Michael Jagels and Teddy Williams; great grandchildren, Jalyn, Amber and AJ; siblings, Clement and his wife Francine, Pierre and his wife Monique and Adele; and lots of cousins, nephews, and nieces. Besides her parents, Pauline was predeceased by her first husband, and the father of her children, Richard Sheets in 1992, second husband, George Swann in 2009; granddaughter, Kayla Reed; and siblings, Marilise, Marcel, Simon, Hughes, and Mario; and a special friend Homer Paradis.

Pauline’s Mass of Christian Burial has been scheduled for Friday, December 3, 2021 at 11:00 AM at Holy Angels Catholic Church, Lake St., St. Albans, VT.

For those who wish, contributions in Pauline’s memory may be made to the SPCA.

To order memorial trees or send flowers to the family in memory of Pauline L. Sheets, please visit our flower store.