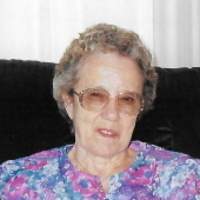 She was born in Montgomery Village, August 5, 1927, the daughter of the late Lewis H and Lydia Mae (Young) Goodhue.

She graduated from Enosburg Falls High School in 1947, third in her class.

August 14, 1949, she married Merrill Allen Cutting in the Enosburg Falls Methodist Church, of which she was a member.

She worked as a Lab. Technician at the United Farmers Creamery, Enosburg Falls, and then was a stay at home mom for several years. She worked a short period for Fonda Container, St. Albans, VT. She retired in 1992 after 25 years from Union Carbide / Eveready Battery Inc., St. Albans, Vt.

Her life revolved around her children, grandchildren, and great grandchildren. She loved to knit, crochet and work in her small vegetable garden.

A Funeral service will be held Saturday, May 12, 2018 at 11:00AM at Spears Funeral Home, 96 Dickinson Ave., Enosburg Falls, VT. Interment will be in East Berkshire Cemetery.

Visitation will be held on Saturday, at Spears Funeral Home from 10:00AM until the hour of the funeral.

Condolences, photos and favorite memories may be shared through www.gossfs.com
To order memorial trees or send flowers to the family in memory of Phyllis Carol Cutting, please visit our flower store.