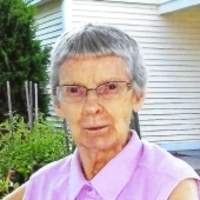 SWANTON - Phyllis B. Holbrook, age 88, passed away on Thursday, August 29, 2019 at the Franklin County Rehab Center in St. Albans.

Phyllis was devoted to her family and was an excellent mother and homemaker. She enjoyed cooking and gathering with family and friends.

She is survived by her son, Bernard Holbrook and his wife Brenda of Swanton; her granddaughter, Angie Holbrook and her husband Jason Hamel and their sons Charles & Matthew all of Shelburne; two brothers, Leonard James and his wife Sharon of Alburgh, and Allyn James and his wife Pauline of Burlington; and several nieces & nephews. Besides her parents, Phyllis was predeceased by her husband, Charles Holbrook; their daughter, Bernadette Holbrook; siblings, Vernon, Eldon, Alton & Alan James, Evelyn McIver, and Kathryn Paquette; and step-brothers, Donald, Kenneth & Avon James.

Phyllis family would like to thank the staff at Franklin County Rehab Center for the excellent care she received during her time there.

In keeping with Phyllis wishes, there will be no calling hours and a private graveside service will be held at the familys convenience in Riverside Cemetery in Swanton.

Condolences, photos and favorite memories may be shared through www.gossfs.com
To order memorial trees or send flowers to the family in memory of Phyllis B. Holbrook, please visit our flower store.