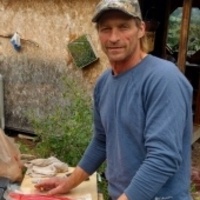 Raymond was raised on the family farm in Sheldon and never lost those roots. After graduating from BFA St. Albans, he had his children in Florida before returning to Sheldon two years later. He found peace in the outdoors, farming, logging, beekeeping and raising pigs. If you found him at his house, you could always park the car in the road and shoot the breeze. Everyone knew Raymond, the mechanic, could fix anything and was always willing to lend a helping hand. He will forever be remembered for having the biggest heart and always putting others first.

For those who wish to honor Raymond, the family requests that you buy a pig, raise it and donate it to Marthas Kitchen, 139 Lake Street, St. Albans, VT 05478.

Condolences, photos and favorite memories may be shared through www.gossfs.com
To order memorial trees or send flowers to the family in memory of Raymond C. Jette, please visit our flower store.