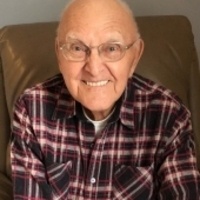 ENOSBURG - Raymond M. Larose, age 92, formerly of Enosburg, passed away on Feb. 26, at Franklin County Rehab. Raymond was born in Swanton on August 30, 1927, eldest son of Pierre and Aurore (Bourgea) Larose. He attended local schools and graduated from Holy Angels Commercial Course in 1945. He worked briefly at Union Carbide in St. Albans, before buying a farm in Georgia, Vt with his bride and mother of his children, Denise (Galipeau) Larose in 1950.

Ray had a varied and interesting work-life. He and Denise farmed for 18 years in Georgia Vt. His next stop was at Aubuchon Hardware in St. Albans. He was promoted to manager of the Enosburg Aubuchon Hardware and worked there for 4 years. Ray completed an 8-year stint at Agway, also in Enosburg. Finally, he owned and operated the Village Delight in Enosburg for 10 years, with his wife Theda (Scott).

Ray was civic-minded and served on the Enosburg Board of Village Trustees for 10 years. He served on the NWRPC for 15 years, 10 years as the Chair. One project of which he was especially proud was the completion of the Rail Trail from St. Albans to Enosburg and beyond. He singlehandedly maintained the Rail Trail from Sheldon to Enosburg for 12 years. In addition, he and Theda maintained the Bridge of Flowers and Lights in Enosburg for many years.

Ray was pre-deceased by his parents and brothers Bernard and Norman and his wife Marguerite (Ferland) Larose, his sister Georgette Gagne and her husband Norman, his youngest brother Robert (1942) and infant son, Robert (1951). He was also pre-deceased by the mother of his children, Denise, and his second wife Theda. A step-son, Randall Scott and son-in-law, Scott Benware, also predeceased him.

Raymond\u0027s family would like to thank all those caregivers who attended to his needs with compassion.

The family asks that in lieu of flowers, donations be made to Franklin County Home Health, 3 Home Health Circle, St. Albans, VT 05478, and/or the Carriage House, 142 Homestead Drive, Franklin, VT 05457, or a charity of ones choosing.

Condolences, photos and favorite memories may be shared through www.gossfs.com
To order memorial trees or send flowers to the family in memory of Raymond M. Larose, please visit our flower store.