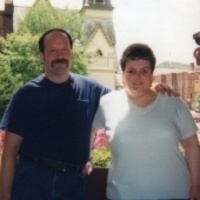 ST. ALBANS - Richard P. Bouchard, age 63, passed away peacefully on Thursday, November 28, 2019 at his residence with his loving wife by his side.

Rick was one of three children in the Bouchard family. He attended Enrico Fermi High School and community college. Rick served in the United States Navy for four years, and after returning from Naval duties he worked at his parents laundromat and then as a machine operator for Belden Co. He married Dawn (Leonard) on June 16, 1984 and they enjoyed 36 years of friendship and marriage. He was her soul mate, beloved husband and best friend. Their beloved dog, Buttercup was a huge part of Ricks life, and offered endless loyalty and love. Rick was a Dallas Cowboys fan and loved working on any kind of electronic device or gadget. He will be remembered for his kind heart, and generosity.

He is survived by his wife, Dawn of St. Albans; brothers, Rod and Ronald Bouchard; and several nieces and nephews. Besides his parents Rick was predeceased by his mother and father-in-law; special aunt Barbara Warner; brothers-in-law Edward and Paul Leonard Jr.

In keeping with Ricks wishes, there will be no public services.

For those who wish, contributions in Ricks memory can be made to Dawn Bouchard to help with expenses, mailed to Kidder Memorial Home, 89 Grand Ave., Swanton, Vermont 05488.
To order memorial trees or send flowers to the family in memory of Richard P. Bouchard, please visit our flower store.