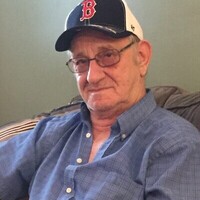 BAKERSFIELD– Richard (Dick) P. Bugbee Sr., 80, of Bakersfield, passed away peacefully on May 21, 2021 at Northwestern Medical Center. Dick was born to the late Harvey and Felicia (Dennis) Bugbee on February 5, 1941.

Dick grew up in St. Albans and was a graduate of BFA St. Albans. Dick married his life partner, Judith Stone on October 18, 1969. Together they raised a son, Richard Bugbee Jr., in the community of Bakersfield.

Dick was a loving husband, father, and friend. He touched and impacted many lives with his generous, kind, and fun-loving spirit. His happiest and most treasured moments in life were spent with his family - in his early days he was often on the dance floor square dancing with his mother or sisters or playing a game of horseshoes with his brothers, while in his later years he frequently visited Fenway Park to watch the Red Sox with his son or was trying to “win big” at a slot machine with his wife. Dick loved to inject humor in a conversation and cherished a good-natured, witty interaction. Even at the end of his life, in his bravest moments, he had a smile on his face and had his family laughing. Dick was a dedicated employee in the retail, construction and technology industries for over 40 years.

Dick had many interest and hobbies. His love for animals was unmatched, where he played with and gave lots of treats to his many dogs and fed the birds. In his spare time, Dick was in the kitchen cooking one of his specialty dishes or in his vegetable garden where he was known for having a “green thumb”. He loved to travel and explore new destinations. His last adventure was his favorite - a trip with his wife, son, and daughter in-law to celebrate his 50th wedding anniversary under the palm trees in Maui, where he enjoyed the sunsets with his favorite “Hawaiian drink”, Bud Light.

For those who wish, a contribution can be made in Dick’s memory to Franklin County Animal Rescue, 30 Sunset Meadows, St. Albans, VT 05478.

Friends and family whose lives Dick touched are invited to his Life Celebration to include visitation on Wednesday, May 26, 2021 from 4:00-7:00PM at Goss-Spears Life Celebration Home, 96 Dickinson Ave., Enosburg Falls, VT 05450, and a graveside service on Thursday, May 27, 2021 at 11:00AM at the St. Albans Bay Cemetery, Lake Street, St. Albans, VT.

To order memorial trees or send flowers to the family in memory of Richard "Dick" Bugbee Sr., please visit our flower store.