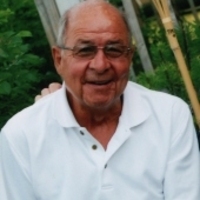 FRANKLIN (Lake Carmi)- Richard A. Mercy, age 77, passed away on Tuesday, May 1, 2018 at his home, surrounded by his loving family and friends.

Richard was raised in Richford and graduated from Richford High School Class of 1958. He was a 20-year Veteran of the United States Navy as a Submariner on the USS Ethan Allen, following a long and distinguished career he received his honorable discharge as a Lieutenant. During his career he mentored many men and women serving in the Armed Services, he would demand the best out of people and accepted no excuses.
He had many hobbies and interests including, golfing, fishing, gardening, cheering on the New York Yankees and Ohio State Buckeyes, enjoying a Bud heavy and going to The Price Is Right game show in New Hampshire. Richard enjoyed time spent on the lake with his family, friends, and the dogs that he cherished. He loved the many hours boating on the lake making sure not to hit the friggen rocks or the weeds.
Richards family will remember him for his many qualities including his sense of humor, being an exceptional provider for his family and friends, his ability to tell you exactly how he felt with no filter and giving the shirt off his back expecting nothing in return. During Richards illness he was in constant pain, never complained, and never gave up.
He was a loving husband, father and grandfather, supporting his children and grandchildren in all aspects, particularly sporting events, where he would travel at great lengths to attend their activities.

For those who wish, contributions in Richards memory may be made to the Richford American Legion Scholarship Fund, 35 River Street, Richford, VT 05476.

Condolences, photos and favorite memories may be shared through www.gossfs.com
To order memorial trees or send flowers to the family in memory of Richard A. Mercy, please visit our flower store.