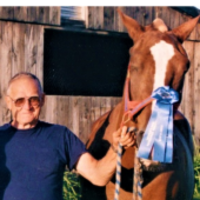 ENOSBURG FALLS - Richard W. Powers, age 83, passed away surrounded by family on Monday, November 25, 2019 at his home in Enosburg Falls.

He was born in Brownington, VT on January 23, 1936, the son of the late Kenneth and Ester (Davanaugh) Powers.

Dick grew up in Derby and attended Derby Academy before joining the U.S. Army. On August 23, 1958, he married Ellenor (Royce) Powers and together had five children. Dick had several different jobs throughout his life including running his own garage, driving tractor trailer trucks, and farming. He enjoyed playing poker and cribbage with friends, and gambling, but his biggest passion was pulling horses. Dick had a knack for making people laugh and enjoyed making others around him smile. He will be remembered for his toughness and his tremendous work ethic, traits he instilled in his children, and the soft spot he held in his heart for his grandchildren.

He is survived by his wife of 61 years, Ellenor Powers of Enosburg Falls; children, Donna and Patrick Vaillancourt of Enosburg, Dale Powers and his significant other, Pam Carruth of Berkshire, Diane Therrien and her husband Michael of OK, and Debbie Marshall and her husband Doug of Highgate; grandchildren, Jason, Kelli, Jeremy, Connor, Shannon, Aaron, Amber, Jennifer, and Eric; great-grandchildren, Emma, Charles, Kase, Tristan, Tagen, Makenna, Sienna, Carsyn, Ariel, and Ryker; brothers, Norman Powers and his wife Sue of CT, Larry Powers and his wife Jan of Newport, and Robbie Powers of VA; sisters, Charlotte Webster of NV, and Jane Moulton and Terry of Orleans; special nephew, Brian Buzzy Webster; many other nieces and nephews; and special friend, Ike Mitchell of Lyndonville. Besides his parents, Dick was predeceased by his son, Dwight Powers; brother, Dale Powers; brothers-in-law, Dick Webster, and Rodney Royce; and sister-in-law, Cynthia Morse.

Dicks family would like to give a special thanks to Dr. Miller and Franklin County Home Health Hospice for the outstanding care he received.

In keeping with Dicks wishes, there will be no public services at this time.

For those who wish, contributions in Dicks memory may be made to Franklin County Home Health Agency, Hospice Program, 3 Home Health Circle, St. Albans, VT 05478.

Condolences, photos and favorite memories may be shared through www.gossfs.com
To order memorial trees or send flowers to the family in memory of Richard W. Powers, please visit our flower store.