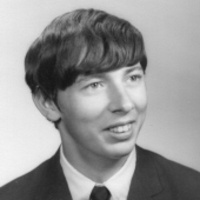 Richard E. Young, age 68, passed away at his Sheldon residence on Tuesday, October 2, 2018, surrounded by his loving family and friends.

Dicky graduated from Swanton High School and attended College at Johnson State and St. Michaels College. After attending college Dicky married Charlene (Santor) Young and they raised their 2 sons, Adam and Aaron in Sheldon. He worked with his family, Young Brothers as a concrete finisher, and in the 90s began his employment at Harrison Concrete. Dicky was a simple man, very hard working, committed to his family and his work considering the Harrison family as his extended family. He found enjoyment in reading Stephen King books, fishing and hunting and watching Downtown Abbey and British Royalty.

He is survived by his son Adam & Melinda Young and their children Zachary and Thomas of Milton. Brothers, Lawrence Young of Essex, Mark Young of Colorado, sisters Sheila Young Lamphere of Swanton, Brenda Young of Bennington, Loretta Young King of Richford, Lisa Young Reynolds of Swanton and Kelly Young of St. Albans. Mother in-law, Pauline Santor and her family of Alburgh. Dicky was predeceased by his parents, his loving wife, Charlene, their son Aaron, and brothers Robert and William Young.

Visitation will be held on Thursday, October 4, 2018 from 4-7 PM at Kidder Memorial Home, 89 Grand Avenue, Swanton.

Interment will take place privately in St. Marys Cemetery at the convenience of the family.

For those who wish, Contributions in Dickys memory may be made to the St. Jude Children Research, 501 St. Jude Place, Memphis, TN 38105.

Condolences, photos and favorite memories may be shared through www.gossfs.com
To order memorial trees or send flowers to the family in memory of Richard E. Young, please visit our flower store.