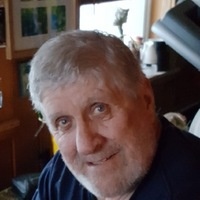 He was born in Fletcher on December 25, 1943 to the late William and Gertrude (Paulin) Morris.

Bob grew up in Fairfield and attended school in East Fairfield. He worked for several local farms for many years, and then Blue Seal where he retired after 20 years. On January 20, 1995 he married Maureen Jewett and the two raised their family in Richford. When Bob wasn’t working, he still liked to keep busy and could usually be found working on one of his many home projects or tending to his vegetable garden. He also enjoyed sugaring with a team of horses, going 4-wheeling, or going for a nice ride while listening to country music. Bob loved being a jokester and had a knack for striking up conversation with just about anyone.

He is survived by his wife of 26 years, Maureen Morris of Richford; their child, Miranda Morris of Johnson; mother-in-law, Dorothy Jewett; siblings, Edith Marshia of St. Albans, Richard Morris and his wife Cindy of Swanton, Philip Morris of Swanton, David Morris and his significant other Hilda Cusson of Fairfield, Sandy Fiske of Sheldon, Phyllis Bovat and her husband Larry of Berkshire, Michael Morris and his significant other Noella Salisbury of Highgate, and Roger Morris and his wife Susan of Fairfield; brothers-in-law Kenneth Denton of Charlotte, and Brian Jewett and his significant other Alicia Juaire of Richford; sisters-in-law, Margaret Morris of Johnson, and Diane Jewett of Berkshire; several nieces, nephews, and cousins; and his four-legged furry children. Besides his parents, Bob was predeceased by his sisters Deborah Denton, and Marjorie Flanders; a brother, William Morris Jr.; father-in-law, Burton Jewett; and brothers-in-law William Marshia Sr. and Michael Fiske.

In keeping with Bob’s wishes there will be no services.

To order memorial trees or send flowers to the family in memory of Robert "Bob" Morris, please visit our flower store.