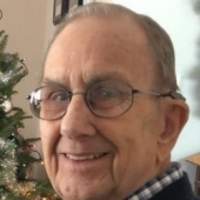 SWANTON - Robert Kenneth Bob Cyr, age 87, passed away peacefully on Friday, March 15, 2019 with his loving family by his side at the Northwestern Medical Center in St. Albans.

After graduating from Franklin High School in 1949, Bob joined the U.S. Air Force. He served four years, spending ten months in Okinawa repairing radar on B-29s during the Korean War. After being discharged in 1953 as a Staff Sergeant, he began working for the U.S. Customs Service. He was assigned to most of the Vermont border ports, spent four years at Dorval International Airport in Montreal, Quebec, Canada, and finished his 36-year career as a supervisory inspector in Highgate Springs.

After retiring from the U.S. Customs Service in 1992, he spent many years volunteering at the Samaritan House in St. Albans and also served on the Board of Directors. He was the Swanton coordinator for Operation Happiness from 1993-2014. He was a member of the Memorial United Methodist Church in Swanton, where he chaired suppers for 25 years and served as the treasurer for 39 years. He was the churchs representative to Marthas Kitchen for over 20 years. Bob was also a life member of the American Legion, V.F.W., and Champlain Country Club.

Bob and Bev traveled to all 50 states, mostly by highway. He enjoyed gardening and carpentry almost as much as playing golf, poker and pool. In 2017, they sold the house they had lived in for 43 years, at the time more than half of his life.

Bob is survived by his wife, Beverly Cyr of Swanton; three daughters, Kathy Holden and her husband Chris of Brandon, Tammy Cyr-Talbott and her husband Michael of Fairfax, VA, and Trudy Cyr and her partner Glenn of Williston; six grandchildren, Collin Chevalier and his fianc Carol-Ann, Corey Chevalier and his wife Sonja, Alyssa Bachand, Ashley Bachand and her partner Jesse, Hayley Talbott, and Hannah Talbott; two great-grandchildren, Ryleigh and Taylor Chevalier; and many nieces & nephews. Besides his parents, Bob was predeceased by his seven siblings.

A memorial service will be held on Sunday, March 24, 2019 at 12:30 PM at the Memorial United Methodist Church, 23 Grand Ave., Swanton, VT. In lieu of visiting hours, the family will be available from approximately 1:30 - 3:30 PM downstairs in the fellowship hall. Light refreshments will be served.

For those who wish, contributions in Bobs memory may be made to Memorial United Methodist Church, 23 Grand Ave., Swanton, VT 05488.

Condolences, photos and favorite memories may be shared through www.gossfs.com
To order memorial trees or send flowers to the family in memory of Robert K. Cyr, please visit our flower store.