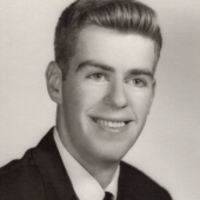 He was born in Enosburg Falls on April 11, 1945, the son of the late Walter and Hilda (Longe) Duffy.

Robert was a lifelong resident of Enosburg Falls and graduated from Enosburg Falls High School in 1965. Robert married his high school sweetheart, Sally (Green) Duffy on October 11, 1966. After graduation, Robert joined the Army National Guard, and then turned his passion for trucking into a career working for Hayes Farm for over 20 years, Richard I. Green Trucking, and most recently McDermotts Trucking. Robert was a proud member of the Enosburg American Legion and had been a member for over 50 years. He never stayed idle and was a self-taught carpenter and mechanic, which came in handy on the road and when it came time to help his grandchildren with their vehicles.

Robert enjoyed camping, taking trips to Florida, gambling, and spending time with his friends, but most importantly he cherished time spent with his family. He will be remembered for his honesty, work-ethic, loyalty, and for being a bit of a jokester.

He is survived by the love of his life, Sally Duffy; son, Matthew Duffy and his wife Mary Lou; grandchildren, Amethyst Duffy, and Blayze Duffy all of Enosburg; brother, Lloyd Duffy and his wife Dale of Sheldon; brothers-in-law, Larry Green and his wife Darlene, and Richard Green Jr. and his significant other Elizabeth Jackson; sisters-in-law, Jayne Carpenter and her husband George, Becky Demar and her significant other Brian Brooker, Nancy Kane and her husband Tom, and Debbie Campbell; nieces and nephews, Donna, Darlene, Ann, Marcella, John, Lynn, and several others; his trucking buddies who were like family to him; and many other friends who will miss him dearly. Besides his parents, Robert was predeceased by his grandparents, and his brother, Douglas Duffy.

A Mass of Christian Burial will be held Saturday, September 28, 2019 at 10:00 AM at St. John the Baptist Catholic Church, Missisquoi St., Enosburg Falls.

For those who wish, contributions in Roberts memory may be made to the Luc Gates Foundation, 2443 Sampsonville Road, Enosburg Falls, VT 05450.

Condolences, photos and favorite memories may be shared through www.gossfs.com
To order memorial trees or send flowers to the family in memory of Robert C. Duffy, please visit our flower store.