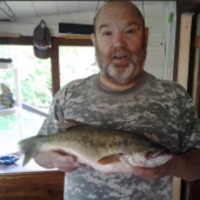 ST. ALBANS / BARRE - Robert A. Tatro, age 56, passed away on Wednesday, September 9, 2020 at the University of Vermont Medical Center in Burlington.

He was born in New Haven, CT on December 14, 1963 the son of Mary (Lawrence) Gervais and the late Robert Tatro.

Robert was a graduate of B.F.A. St. Albans. He worked in maintenance throughout most of his life. In his spare time, Robert enjoyed hunting, and fishing. He also enjoyed sports; he loved watching Stone Cold Steve Austin in wrestling, Nascar, the Miami Dolphins, and the New York Yankees. Robert looked forward to Christmas each year so he could get together with family.

In keeping with Roberts wishes there will be no public services.

For those who wish, contributions in Roberts memory may be made to Franklin County Animal Rescue, 30 Sunset Meadows, St. Albans, VT 05478.

Condolences, photos and favorite memories may be shared through www.gossfs.com
To order memorial trees or send flowers to the family in memory of Robert A. Tatro, please visit our flower store.