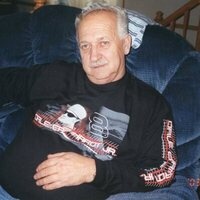 FRANKLIN - Roger Corey, a longtime resident of Franklin passed away peacefully Friday November 20, 2020 at his home with his loving family at his side.

He was born in Johnson, Vermont on April 24th, 1943, to the late Winfred and Marion (Lafley) Corey.

Roger was an avid sportsman looking forward to hunting season each year tagging many deer and even a bear. In his early years Roger took part in many big projects including the construction of I89 in the 70s, the building of the Saint Albans City School and retired as a member of the International Union of Operating Engineers. He took great pride in his work and post-retirement founded Sunstate Installers in Apopka, Florida which he operated for many years constructing playgrounds in schools and churches across Florida. Moving back to Vermont in 2000 Roger continued to putter with his heavy equipment throughout the years, always willing to lend a hand on the job.

Roger was a regular ball player and made many lifelong friends playing on the men’s league, Beauregard Equipment softball team. He was a renowned pool shark winning many tournaments, he was also a big Red Sox fan and a huge Dale Earnhardt fan, never missing a race. A lifetime member of the VFW, American Legion Green Mountain Post 1 and the Elks Lodge 1566, he could often be found at many of the local clubs around the area on Friday afternoons enjoying a cold beer served by his favorite bartender Shawn White. On Sunday mornings Roger enjoyed visits to the Hen House to see his daughter and granddaughter for his favorite meal - sausage gravy and biscuits. He also enjoyed his many trips to Waterbury to see old friends and family with his son Brian, and regular trips to the casino with his good friend Porter Hodgdon. Roger was blessed with many good friends, Wayne Laroche, Danny Lavigne, Tuffy Mulheron, Donnie and Kelly St. Francis, Frank Belrose, Vaughn Bourgeois, Gary Rice, Carroll Boudreau, John Flood, Neil and Kathy Stephens and boys, and many, many others. Thank you as well to the Depatie’s who he loved to sugar with.

Special thanks to Kevin LaPan and John LaFrance and to those who visited him throughout the years to have a cold one and tinker with his equipment - it meant so much to him and he enjoyed spending his time with all of you.

Special thanks to Bayada Healthcare for the exceptional care provided in his final days.

He fought a long courageous battle with Alzheimer’s disease and held on long enough to hold the hand of his newest great-granddaughter, Isabella.

Following Roger's wishes there will be a celebration of life to be announced at a later date in the Spring.

Contributions in Roger's memory can be made to the Franklin County Animal Rescue, 30 Sunset Meadows, St. Albans, VT 05478, for he loved his beloved rescue cats Lucy and Lucky.

To order memorial trees or send flowers to the family in memory of Roger Corey, please visit our flower store.