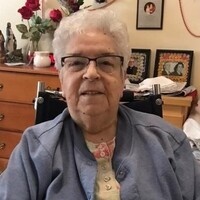 She was born in Highgate on December 26, 1935 to the late Henri & Maria (Gagne) Laroche, according to her first-born nephew, Ray Lambert, her mother would call her “La Rose.” She attended Highgate schools and graduated from St. Anne’s Academy in Swanton, VT.

Rosanna married Maurice Paquette on September 8, 1956, and they had five wonderful children. She was able to stay home and provide a loving and caring home for them. She helped to support her family by doing the book work for Paquette’s Mobil in Highgate Center for 17 years. After her children were all in school, she worked as a seamstress at the Highgate Sewing Shop and once retired, sewed Teddy Bear Parts for the Vermont Teddy Bear Factory.  For many years she volunteered at the Maple Festival at the Maple Donut station, while Maurice was at the Maple Syrup Tasting station. Rosanna was a long-time member of the Ladies of St. Anne and a long-time parishioner of the St. Louis Church. When Rosanna had free time, she enjoyed reading novels, doing puzzles, sewing, and dancing. She found great joy traveling on bus tours. Rosanna was able to visit Missouri, Tennessee, and South Dakota. She adored Bob Barker on the Price Is Right and was an avid Red Sox fan!

Family and friends are invited to Rosanna’s Life Celebration events to include visitation on Saturday, February 20, 2021 from 9:30-10:30 AM at Goss Life Celebration Home, 89 Grand Ave., Swanton. Followed by a Mass of Christian Burial at 11:00 AM at St. Louis Catholic Church, Lamkin Street, Highgate. Interment with follow in the St. Louis Catholic Cemetery, Lamkin St., Highgate, VT 05459.

For those who wish, contributions in Rosanna’s memory may be made to the Franklin County Home Health & Hospice, 3 Home Health Circle # 1, St Albans City, VT 05478.

Rosanna’s family would like to extend sincere gratitude for the wonderful care she received over the past several years from Franklin County Home Health & Hospice, Holiday House, and Franklin County Rehabilitation Center.

To order memorial trees or send flowers to the family in memory of Rosanna C. Paquette, please visit our flower store.