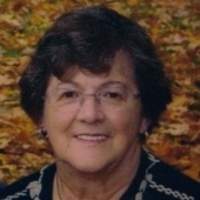 HIGHGATE CENTER - Rosemary J. Stanley, age 86, passed away surrounded by her loving family on Wednesday, October 23, 2019 at her home in Highgate Center.

Mom graduated from Franklin High School and then attended Bishop DeGoesbriand School of Nursing. She married H. Bruce Stanley on November 12, 1955. Mom worked as a Registered Nurse at Kerbs Memorial Hospital before staying home to raise their family. Mom was a devoted wife, mother, grandmother, great-grandmother, sister, and friend. Family and traditions met the world to Mom. She worked alongside Dad on the farm raising seven children, teaching them how to work together as a family with gardening, haying and sugaring. Mom enjoyed planning family events such as day trips, picnicking, and holiday meals with Sundays being the most important day for family time. She attended as many of the grandchildrens events, near or far, as possible. As great-grandchildren came along she enjoyed being part of their lives as well. Mom was proud of the fact that she returned to work as an RN at Northwestern Medical Center after raising her children.

In retirement, Mom became a world-wide traveler. She has been to Europe and Asia, and she especially liked their trips to Maine and Florida. Mom didnt stop caring for others in retirement, she made pillowcases for the pediatric patients at Northwestern Medical Center for several years. Later in life her religion brought her much peace. Not only was she involved in the Ladies of St. Anne, she gave her time assisting in religious ed classes, church dinners, bingo, and holy hours.

The Mass of Christian Burial will be held Monday, October 28, 2019 at 11:00 AM at St. Louis Catholic Church, Lamkin St., Highgate Center. Interment will follow in St. Marys Cemetery in Franklin.

For those who wish, contributions in Rosemarys memory may be made to Franklin County Home Health Agency, 3 Home Health Circle, St. Albans, VT 05478.

Condolences, photos and favorite memories may be shared through www.gossfs.com
To order memorial trees or send flowers to the family in memory of Rosemary J. Stanley, please visit our flower store.