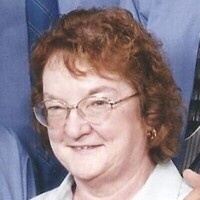 ENOSBURG FALLS– Sally R. Charron, age 74 took her most beautiful journey to be with the lord on her birthday Thursday, November 4 after battling complications with renal disease. Sally was born in St. Albans to the late Ralph Clark and Thelma (Sharrow) Gross. Though a quiet person, she will always be remembered for her thoughtfulness and generosity.

Being raised the youngest of 6 in Sheldon Springs, she attended high school at BFA St. Albans. At the young age of 21, in Sheldon, Sally became VT’s youngest Town Clerk, Town Treasurer and Town School District Treasurer. In 1973, she married Leonard Charron and in 1979, after 10 years as town clerk, she resigned to be home with Leonard and 3 very young children on the family farm. As her children went to school, Sally became a school board member and bookkeeper for Sheldon Elementary, then a bank teller, then was employed by the contractor for Immigration for 21 years until her retirement in 2017. Sally was also parish secretary at St. John the Baptist Catholic Church from 1992 till recently, working with 11 different priests.

Sally was most proud of her children and grandchildren and all their accomplishments. She treasured her memories from numerous vacations within the US, Canada and Caribbean islands, spending time with family and friends, attending Bingo with her sisters, hosting family gatherings, and spending quiet time at home with her kitties, playing games and reading. Sally was a proud and active member of the Eastern Stars since 1966, the Ladies of St. Anne Auxiliary and several other community and church organizations.

Friends and family are invited for visitation on Thursday, November 11, 2021 from 4-7:00PM at the Goss-Spears Life Celebration Home, 96 Dickenson Ave., Enosburg Falls and a mass of Christian burial, officiated by Fr. Daniel Jordon on Friday, November 12, 2021 at 11:00AM at St. John the Baptist Catholic Church, 236 Missisquoi Street, Enosburg Falls. Interment will follow at St. John the Baptist Catholic Cemetery. The family respectfully requests that all in attendance, must wear a mask.

The family would like to express an overwhelming amount of gratitude to the wonderful people at McClure Miller Respite home for the wonderful care Sally received over her last few weeks.

In lieu of flowers, please consider a contribution to St. John the Baptist Catholic Church, P.O. Box 563, Enosburg Falls, VT 05450, or simply extend an act of kindness in Sally’s memory.

To order memorial trees or send flowers to the family in memory of Sally R. Charron, please visit our flower store.