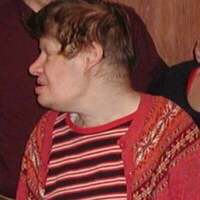 SOUTH HERO – Sara Eleanor Roberts (Sally) passed away in her sleep at home in South Hero Thursday afternoon, January 21, after a period of declining health. She was born August 24, 1944, in Philadelphia, the daughter of Harold Roberts and Eleanor (Le Bon) Roberts.

She had profound mental deficits and was unable to speak, with capacities in most regards no more advanced than a small child. She was as stubborn as the day is long, and she had a short temper, especially when things weren’t done exactly as she expected.

In an era when most children with such broad challenges were packed off to institutions, her parents raised her alongside her younger sister, giving her as many opportunities as possible to express herself and enjoy her world.

Sally loved animals, particularly dogs and cats. One of the very few distinct vocalizations she used – “Uvah!” – was her term for dog. She also adored jigsaw puzzles and could complete even large ones in short order. When that wasn’t a sufficient challenge, she would mix several puzzles together and then sort them out before assembling them. She liked to do the same with playing cards, and her room was often full of bags of mixed decks in various stages of restoration.

She had a large collection of stuffed animals, and enjoyed watching television, especially Animal Planet. Sally was a complicated soul and living with her could be complex and challenging. We’d like to think that Sally, finally free of her disabilities, was greeted by her mother, father, and brother-in-law along with as many slobbery puppies as she could handle. She is at peace now, and we all take comfort in the knowledge that she enjoyed a long and happy life.

She was predeceased by her parents and her brother-in-law, James Hedbor, who helped care for her for many years. She is survived by her sister, Eloise Hedbor; her nephew and nieces, Lars Hedbor, Lisa Diesel, Ingrid Hedbor and Astrid Lague; great nephews and nieces, cousins, and cherished friends.

There will be no public services for Sally.

To order memorial trees or send flowers to the family in memory of Sara "Sally" Roberts, please visit our flower store.