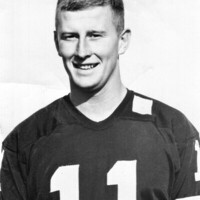 Pepper left us this week, on a snowy late April day, which was absolutely appropriate for the diehard skier that he was.  Born in Yonkers, New York, Pepper grew up in White Plains and Hawthorne. He graduated from Briarcliff High School in 1956, then attended the University of New Hampshire, before ultimately graduating from the University of Arizona and the Thunderbird School. Between UNH and UofA, Pepper played semi-pro football before being drafted into the US Army, where he was stationed in Stuttgart, Germany.

After an early career in insurance and real estate, Pepper found his true calling in his 40s as a teacher.  He returned to school at the Université Laval in Quebec City and received his teaching certificate.  He taught French, as well as other subjects, at Milton High School.  A lifelong athlete, Pepper was on the ski patrol at Cochran’s Ski Area throughout the 70s and early 80s, then moved to Smuggler’s Notch, where he was a ski instructor for 35+ years.  Although an avid tennis player, from the moment he picked up a golf club, tennis was left in the dust.  Once the ski slopes closed in the spring, Pepper’s passion for golf kept him on the links nearly every day until the flurries flew in the fall.

Pepper is survived by his daughter, Meghan, and her husband Andy; his son, Senan; several nieces and nephews; and many friends and acquaintances. He was predeceased by Alison, the love of his life; his sisters, Joan, Sheila, and Mary Louise; and his brother, John.

We will miss the ol’ Irishman’s serious dance moves, his clotheshorse ways (more golf shirts than Tiger Woods), his generous smile, and the twinkle in his eye that he shared with everyone.

Here’s to beefsteak when you’re hungry, whiskey when you’re dry, all the women you’ll ever want, and heaven when you die. Sláinte!

To order memorial trees or send flowers to the family in memory of Senan "Pepper" E. Sweeney, please visit our flower store.

The Barn at Boyden Farm