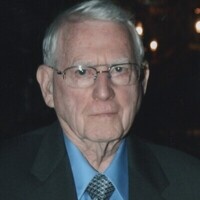 He was born in Sheldon on August 11, 1926 to the late Wallace and Velma (Beede) Kittell.

Sherwood graduated from Enosburg Falls High School in 1944 and married Kathryn Morrill on October 11, 1957. He owned and operated Morrill’s Auto Parts in Swanton for many years. Sherwood’s life revolved around his family and he cherished the time he spent with them. He was a die-hard New York Yankee fan, even though they lost every game he attended! He also rooted for the Duke Blue Devils. Sherwood was an active member of the Swanton community and he enjoyed being part of the local Chamber of Commerce and Knights of Columbus.

He is survived by his daughter, Martha Kittell and Frank Kodman of Montreal, Quebec; son, Robert Kittell and his wife Phoebe of Highgate Springs; two granddaughters, Megan Kittell of St. Albans, and Courtney Bourgeois of Newport; four great grandchildren, Gwendolyn Kittell, Maverick Burke, Joseph Bourgeois, and Emmett Bourgeois; sister-in-law, Audrey Jewett of St. Albans; and several nieces and nephews. In addition to his parents, Sherwood was predeceased by his wife Kathryn Kittell on December 5, 2014; and brother, Laurel Kittell on May 17, 2012.

In keeping with Sherwood’s wishes, a private funeral service will take place at The Goss Life Celebration Home. He will be laid to rest in St. Mary’s Cemetery in Swanton.

For those who wish, contributions in Sherwood’s memory may be made to Missisquoi Valley Rescue, P.O. Box 222, Swanton, VT 05488.

To order memorial trees or send flowers to the family in memory of Sherwood W. Kittell, please visit our flower store.