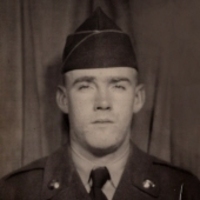 Silas served in the Army during the Korean Conflict as a Military Police Officer. After three years of active duty he transferred to the Army National Guard. Silas worked at the Pulp Mill for thirty-eight years before retiring. Silas and his life-long partner Ardelle were members of the American Legion for over fifty years. During those fifty years they loved to travel all over the state for legion conventions.

He was also an avid bowler and he enjoyed bowling on a team with his buddies on Monday and Wednesday nights for over 30 years at the Enosburg Dairy Center. He brought home many trophies from the tournaments he attended over the years. Following retirement, Silas loved to sit in his rocking chair, watch baseball games on the television and watch the birds outside that he fed every day. His other love was his cats, feeding treats and spoiling them with all kinds of toys.

A funeral service will be held Friday, March 9, 2018 at 3:00 PM at Spears Funeral Home, 96 Dickinson Ave., Enosburg Falls. Interment will be held this spring in the Sheldon Village Cemetery.

Visitation will be held on Friday at Spears Funeral Home from 2:00 PM until the hour of the service.

For those who wish, contributions in Silas memory may be made to Franklin County Animal Rescue, 30 Sunset Meadows, St. Albans, VT 05478 or to the University of Vermont Cancer Center, The Courtyard at Given, 4th Floor North, Burlington, VT 05405.

Condolences, photos and favorite memories may be shared through www.gossfs.com
To order memorial trees or send flowers to the family in memory of Silas "Leroy" Hurlbut Jr., please visit our flower store.