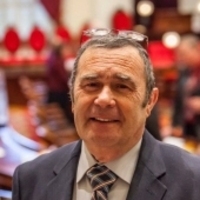 HIGHGATE SPRINGS - Stephen C. Beyor, age 73, passed away peacefully on Thursday, August 27, 2020 at his home with his wife by his side.

He was born in Highgate Springs on February 14, 1947 to the late Carlton Kike and Grace (Brown) Beyor.

Steve married Dianne in 1972, and they began their family. He grew up on the water in Highgate Springs helping his Dad run the boat livery. Steve worked as a tool and diemaker at Union Carbide for 43 years. After he retired, he devoted six years to the State of Vermont in the House of Representatives, holding seat number 104. He worked alongside his partner Chuck Pearce in District 5, serving the communities of Highgate, Franklin, Berkshire, and Richford from 2013 to 2018. Steve was also a proud member of the Vermont National Guard. He was also an instructor for the Vermont Fish and Wildlife Departments Hunter Safety Course for more than 25 years. He will be remembered as an avid outdoorsman, enjoying hunting and fishing with his family and friends.

He is survived by his wife, Dianne Beyor of Highgate Springs; his two children, Kimberly Kelley and her husband Richard of Swanton, and Michael Beyor and his partner Devon Traver of Bakersfield; grandchildren, Daniel and Grace Kelley and Reed and Fern Beyor. Besides his parents, Steve was predeceased by several aunts, uncles and friends.

Condolences, photos and favorite memories may be shared through www.gossfs.com
To order memorial trees or send flowers to the family in memory of Stephen C. Beyor, please visit our flower store.