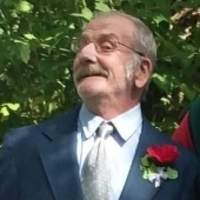 RICHFORD - Stephen L. Chapman entered the Kingdom of Heaven on October 17, 2018 at his home in Richford. At his side was his wife Angela and several close friends.

Steven was born in Rumford Maine on August 27, 1953 to Charles and Dorothy Brown. When he was 14 months old, he was adopted by Sherwin and Frances Chapman.

When he was 6 years old, the family moved to Franklin Vermont and eventually settled in Richford (1960). He attended elementary school in Richford and completed 10th grade at West Way High School in Toronto Canada. His time in Toronto was very special to him and something he enjoyed very much.

Stephen proudly served his country starting in 1976 when he joined the Vermont National Guard. After serving 2 years in the Guard, he joined the United States Navy (1978). He was assigned to Mine Division 125 as a Boatswain Mate stationed in Charleston S.C. He received his Honorable Discharge in 1981.

In 2003, Stephen met Angela Goodrich at a time when his life needed to be straightened out. Angela told him point blank that he needed to shape up or ship out if he wanted to be with her. Stephen made that commitment and on February 18th, 2006 he and Angela were married.

In August of 2010, Stephen began his walk with Jesus and attended Richford First Baptist Church. On September 9th, 2018 Stephen and Angela professed their commitment to each other and God by renewing their marriage vows. Stephens faith was steadfast through his illness and his eyes were on the Lord. Hours before passing, Stephen said aloud Lord, I\u0027m ready to go home .

Stephen is survived by his wife, Angela; his children, Garret and wife Jessica, Amanda and husband Andrew, and Darla Jean; grandchildren, Damian, Hunter, Andrew Jr., Kelli, Cassidy and Abigail; siblings, Charlie, Betty and Fred; special friends, Jim Maillette and Porky Tatro. He was predeceased by his brother, Phillip and by both biological and adoptive parents.

A special thank you to Franklin County Home Health for their assistance during the last several weeks Stephen was with us.

A Celebration of Life will be held on Friday October 26th, 2018 at 11:00 AM at the Richford First Baptist Church located at 33 School Street in Richford. Visitation will be from 10:00 AM until the hour of the service. A time of fellowship will follow.

Condolences, photos and favorite memories may be shared through www.gossfs.com
To order memorial trees or send flowers to the family in memory of Stephen L. Chapman, please visit our flower store.