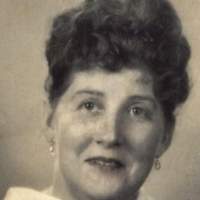 She was born on her family farm on Egypt Road in Bakersfield on March 10, 1927 the daughter of the late Rolice and Flossie (Wells) Britch.

Theda worked hard all her life on the family farm, for many years at General Electric, and many other places where she had many friends. No job was too much for her. She had a home bakery and catered for many. Theda and her husband owned the Village Delight in Enosburg. For many years and she was well known for her delicious cooking. She fed many, whether they could pay or not. On September 27, 2000, Theda and her husband Raymond were presented with a plaque from the Village of Enosburg honoring them for their volunteer work on the Bridge of Flowers and Light. Thedas uncanny sense of humor earned her the nickname of Spitfire .

Condolences, photos and favorite memories may be shared through www.gossfs.com
To order memorial trees or send flowers to the family in memory of Theda M. Larose, please visit our flower store.