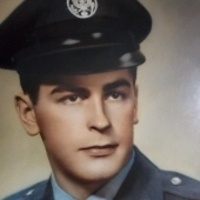 He was born in Nashua, NH on January 8th, 1933 to the late Thomas and Emma (Provasoli) Forsyth Jr.

Tom attended Milford High School in New Hampshire, where he graduated in 1951 as President of his class. He excelled at Basketball and won the State of New Hampshires Foul Shooting Championship.

He enlisted in The United States Air Force in 1952 and was sent to French Morocco as a Radar Operator with the 735th squadron. Upon his return he was stationed at the Air Force Base in St. Albans, Vermont. It was then that he met the love of his life, Janet (Rocheleau) who was working at Kerbs Hospital. They were married at Nativity Church in Swanton in 1955. Tom was honorably discharged from the service in 1956 and went to work as a heavy equipment operator in Peabody, MA. In 1966 Tom and Janet moved back to Swanton where they owned and operated Forsyths Florist on Spring Street. In 1973 they sold the business and moved with their family to DeLand, FL where Tom worked for Holiday House Corporation where he was in charge of day to day affairs for the owner. Tom and Janet also owned and managed several rental properties during this time. In 1996, they decided to once again call Swanton home. Tom was a member of the American Legion and Disabled American Veterans.

Tom is survived by his sister, Eleanor Wood and her husband William; sisters and brothers-in-law, Cynthia Forsyth, Marie Rocheleau, Mark and Edna Casey, and Yvonne Fradet; and a special aunt, Helen Kawecki.

We also want to thank the visiting Priests from Nativity BVM Parish and nurses and attendants from Franklin County Home Health.

The Liturgy of Christian Burial will be held on Saturday, July 18, 2020 at 11:00 AM at Church of the Nativity, 65 Canada Street, Swanton, VT. Interment will follow in the St. Marys Catholic Cemetery.

For those who wish, contributions in Thomass memory may be made to the American Diabetes Association, 2451 Crystal Drive, Suite 900, Arlington, VA 22202.

Condolences, photos and favorite memories may be shared through www.gossfs.com
To order memorial trees or send flowers to the family in memory of Thomas Forsyth III, please visit our flower store.