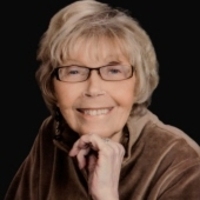 SWANTON - Virginia Ginger Erno of Swanton died peacefully on November 8, 2017 at the age of 95.

Ginger lead a long, full, and happy life. She was born in Swanton on February 3, 1922 to the late Walter & Addie (Sartwell) Fadden, and prided herself on being the oldest Swanton-born town member. Ginger was spirited from the time she was a child; she loved to ride her bicycle around town with her feet on the handlebars and climb the tree in her front yard. She played basketball in high school and was the last surviving graduate of her Swanton High School class. During World War II, Ginger joined the war effort by assembling airplane parts at Pratt & Whitney in Hartford, CT. She met her husband of over fifty years, Hayden Erno, out dancing at Barkers in St. Albans (now Bayside Pavilion). Haydens opening line when he learned she was living in Hartford was, Why dont you stay here and marry me? Six months later, she did.

Ginger and Hayden\u0027s house, once the property of Northern Bus Lines, was renovated into the lovely home where Ginger lived for almost 70 years. They had two children, Pamela (Erno) Smith, married to Tom Smith of St. Albans, and Kim Erno; four grandchildren, Melissa, Molly, Katie, and Michael; and four great-grandchildren, Liam, Quinn, Hazel, and Oliver.

Ginger was creatively gifted; she enjoyed a good craft project and had an eye for antiquing. She was a beautiful seamstress; all four of her grandchildren received handmade quilts for their high school graduations. Ginger spent many summers with family and friends at her camp on Lake Champlain, which her grandchildren knew as Omas Lake. She was a long-time member of the United Methodist Church and also attended services at the West Swanton Church. She loved maple creamies, made a mean apple pie, and took pleasure in watching the town goings-on from her front porch with a glass of Riesling.

Ginger is survived by her son, grandchildren, great-grandchildren, and many nieces and nephews. A memorial service celebrating her life will be scheduled for a later date. For those who wish, donations in Gingers memory may be made to the UVM Medical Center Foundation.

Condolences, photos, and memories are welcomed by Gingers family and may be shared through www.gossfs.com
To order memorial trees or send flowers to the family in memory of Virginia "Ginger" Erno, please visit our flower store.