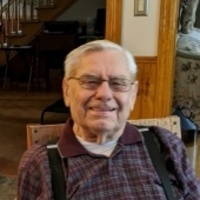 SWANTON - Warren H. Fournier, a lifelong resident of Swanton, VT passed away on Tuesday September 8th at the Northwestern Medical Center with his family by his side. Warren was born to Adhemar and Leopoldine (Levesque) Fournier in August of 1928. He was 92 years young.

Warren grew up with his family on the Fournier family farm in West Swanton, VT. Along with his siblings and his Mother, they worked diligently to preserve their family following the death of their father and the devastation of the great depression.

Warren was drafted into the United States Army in 1953 and fought in the Korean Conflict. At the end of his deployment, Warren was chosen to rebuild the Schools which had been destroyed during the conflict. Warren was immensely proud of this military service and of The United States of America. He brought that pride back with him and shared it with his family and community. Warren was an active member of the VFW and the American Legion. He was tireless in maintaining his promise that those who served and died for our freedom would never be forgotten. Among his efforts was the design, construction and renaming of Swantons Veterans Memorial Park, as well as the dedication of The Alburgh Veterans Memorial Bridge.

In addition, in the 1970s Warren served as Selectman for the Town of Swanton, and for many years he served as a member of the Towns Civil Authority Board. He also held the position of Justice of the Peace. In so many ways Warren was an active member of his community. In its early days, Warren was involved with the enacting of legislation for the creation of special education services within the State of Vermont. In 2003 Warren was chosen as Swantons Citizen of the Year. This was a great honor for him and one of which he was immensely proud.

Upon returning home from the service, Warren was a truck driver, working with his brother Leopold, making regular runs to Boston hauling Turkeys from West Swanton. Soon after, Warren began his own Construction business, building and renovating many of the homes and businesses throughout the area. Warren built the Home Improvement Center next to his home on route 78, here he sold paint, wallpaper, and light hardware. He repaired screens, fixed and replaced all types of windows and doors. In the early 1980s Warren expanded his shop and craft to include custom mill work, producing intricate moldings, spindles, staircases and flooring, as well as other detailed pieces necessary for maintaining many of the antique homes throughout the area and state. Warren also enjoyed making cedar lawn furniture and decorative screen doors. At the height of his career Warren provided employment and training to as many as 50 men. Warren was devoted to and loved his work. He believed that if you loved what you do, you would always be retired. He worked with his son Michael in the shop every day until July of this year.

He married Gloria (Brooks) Fournier on November 23, 1957 at the Church of The Nativity in Swanton. Together they raised 3 children. He leaves behind his son Michael and his wife Teresa of Swanton, son James of Swanton and Daughter Heather Larrabee and her husband Craig of San Antonio, TX. Grandchildren Sara Fournier, Hilary Meunier, and her husband Cody, as well as Claire, and Warren Larrabee, and Great grandchildren Gabriella and Carson Meunier as well as several nieces, nephews, and special friends, including Louise Benjamin of Alburgh. Besides his parents, Warren was predeceased by his wife Gloria on September 3, 2007, sister Rita Mysliwiec and husband Rudy, Brothers Leo and his wife Ilene, Peter and his wife Florence and Rene and his wife Noella.

Liturgy of Christian Burial will be celebrated Tuesday September 15 at 11:00 am. At the Church of the Nativity of the Blessed Virgin Mary, 65 Canada Street, Swanton. Father James Dodson will be the celebrant and homilist. The Rite of Committal and Internment will follow at the Fournier family lot in Saint Marys Roman Catholic Cemetery.

Calling hours with be between the hours of 2 to 7 on Monday September 14 at Kidder Memorial Home, 89 Grand Avenue, Swanton, VT.

Donations in Warrens memory may be made to the Epilepsy Foundation of Vermont, 56 Merchants Row Rutland, VT 05701. Or the Church of the Nativity of the Blessed Virgin Mary, specifically for the stained-glass window restoration fund, 65 Canada Street, Swanton, VT.

Condolences, photos and favorite memories may be shared through www.gossfs.com
To order memorial trees or send flowers to the family in memory of Warren H. Fournier, please visit our flower store.