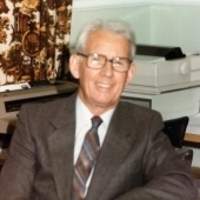 RICHFORD - Wendell Linus Fortier Sr., age 98, passed away on Monday, August 12, 2019 with his family by his side at Our Lady of the Meadows in Richford.

He was born in Richford on August 19, 1920, the son of the late Albert & Beatrice (Lovelette) Fortier of Richford.

Wendell graduated from Richford High School where he played soccer, baseball, and hockey. He was a lifelong resident of Richford with the exception of the period he attended and graduated from Becker College in Worcester, MA. He also worked in that area for a period before serving in the United States Merchant Marines and Naval Reserves from November 1943 through December 1945. He continued in the Naval and Army Reserves following separation from the Merchant Marines.

On February 12, 1944, he married the love of his life, Sheilah. After leaving the Merchant Marines, they moved back to the Richford area where Wendell worked at the Bobbin Mill, John Hancock Insurance Company, and then the Canadian & Pacific Railroad at the train station in Richford. Wendell ran for, and was elected as Town and Village Clerk/Treasurer in Richford in March of 1961. He served in that capacity for 25 years. He also sold real estate during this time.

Wendell enjoyed hunting, particularly for deer and last hunted when he was 92. He also loved Trout fishing but, didnt mind Smallmouth Bass or Northern Pike fishing either. He and Mom loved spending time at camp on Lake Carmi, especially with the Grandkids.

He is survived by his children, Wendell A. Fortier and his wife Candice, and Leonard F. Fortier and his wife Suzanne all of Richford; 7 grandchildren; and 6 great-grandchildren. Besides his parents, Wendell was predeceased by his wife, Sheilah Elizabeth (Daniels) Fortier; an infant son, Wendell Linus Fortier, Jr.; and his sister, Barbara (Fortier) Kittell and her husband William.

A service of celebration will be held on Tuesday, August 20, 2019 at 11:00 a.m. at the Richford First Baptist Church, 33 School Street, Richford, VT. Interment will follow in the Richford Center Cemetery.

Condolences, photos and favorite memories may be shared through www.gossfs.com
To order memorial trees or send flowers to the family in memory of Wendell L. Fortier Sr., please visit our flower store.