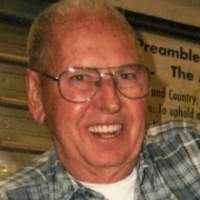 SHELDON - Wilfred Willie Commo, age 90, passed away on Saturday, January 19, 2019 at his home in Sheldon with his family by his side.

He was born in Burlington on October 8, 1928, the son of the late Henry & Dorthey (Deforge) Commo.

Willie grew up in Underhill and worked as a farmhand and on the railroad until he joined the Army in 1951. On December 24, 1953 he married the love of his life, Mary (Domina) Commo. The two lived in several places in Connecticut where they raised their four children until they moved to Sheldon after Willie retired from Eastern Trucking in 1988 after 30 years. He was a proud member of the American Legion Post 88 in Sheldon Springs for 28 years and was an active member of The Vermont Association for the Blind and Visually Impaired. Willie loved being outside and enjoyed fishing on his pontoon boat, hunting, and riding motorcycles. He especially treasured his summers spent with his family at their Commo Family Camp on Lake Carmi and their winters snowmobiling at their camp in New Hampshire. His hobbies included; bowling, square dancing with Mary, and listening to and singing country music. Willie welcomed everyone and will be remembered for his happy go lucky personality.

He is survived by his wife of 65 years, Mary (Domina) Commo of Sheldon; his children, Kim Paquette & her husband Marcel of Enosburg, Ricky & his wife Patricia of Enfield, CT, Debbie Beaucage of Canada, Joseph H. Commo & his wife Nancy of Highgate; 11 grandchildren; 19 great-grandchildren; 2 great great-grandchildren; his siblings, Joseph A., Marion, Evelyn, Jane, Elaine, and Bertha; and several nieces and nephews. Besides his parents, Willie was predeceased by his son-in-law, Timmy Beaucage; his brothers, Clyde and Leonard; and his sister Linda.

For those who wish, contributions in Willies memory may be made to The Vermont Association for the Blind and Visually Impaired, 60 Kimball Ave., South Burlington, VT 05403.

Condolences, photos and favorite memories may be shared through www.gossfs.com
To order memorial trees or send flowers to the family in memory of Wilfred "Willie" J. Commo, please visit our flower store.