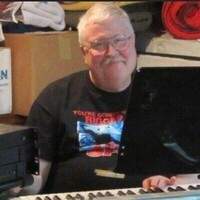 Bill graduated from Missisquoi Valley Union High School in 1971. He then attended the University of Vermont and received a teaching degree. Teaching was not what Bill anticipated so he changed careers, eventually landing at IBM where he worked until he retired. Bill was a proud member of the Mason's Lodge 81, Isle La Motte. He found great satisfaction giving back to local communities and volunteering. He volunteered at the Isle La Motte Public Library, the Swanton Historical Society and played organ for St. Luke's Episcopal Church in Alburgh. Music was always Bill's greatest passion. He started taking piano lessons in 3rd grade and continued playing keyboard throughout his life. He was always in a band: Raspberry Teaspoon, the Allard brothers Band, and KLS to name a few. He joined the KLS band (John Kains, Bill Lunna, and Richard Sutphen) about 13 years ago. They released 4 CD's with a 5th scheduled for release in January 2022 in honor of Bill. KLS wasn't just a band. The band consisted of John on bass, Richard on guitar and drums, Bill on keyboard and vocals, Erin was lead vocalist, and the newest member Melvin, was also a vocalist and bass player.  They were a close-knit group of friends who became like family. Many great friends were made along the way with lots of great music! Bill was known as the "dog whisperer". All the band members dogs came to Bill for love, affection, and treats. Cinder, Muffin, Fluff, Biscuit and Cupcake will miss Bill’s attention. Bill had a wide circle of friends, many going back to his days in high school. Terry Tuck and Bill used to pretend they had a radio station in Bill's room when they were kids. As adults Bill and Terry had a lot of fun at their hobby broadcast station 1630AM in Isle La Motte. How does one say in such a small amount of words, what will the world for us be like without Bill in it. Bill will be greatly missed by his family, friends, and the communities he was involved with.

Bill leaves behind his siblings, Karen L. Lunna of South Port, NC, and Stephen R. Lunna and his wife Jennifer of Box Elder, SD; several nieces and grand nephews; and too many special friends to name. He was predeceased by his parents, Robert and Leone.

Bill’s family and friends are invited to a Memorial service on Saturday, June 4, 2022 at 11:00 AM at the Goss Life Celebration Home, 89 Grand Avenue, Swanton, VT 05488. Interment will follow in the Riverside Cemetery, North River Street, Swanton.

Donations in Bill’s memory may be made to the Franklin County Animal Rescue, 30 Sunset Meadows, St. Albans, VT 05478.

To order memorial trees or send flowers to the family in memory of William "Bill" D. Lunna, please visit our flower store.