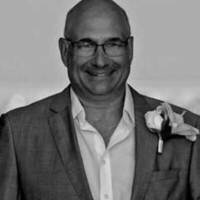 He was born in Bismarck, North Dakota on January 20, 1961, to Donald Mueller and the late Patricia (Paulus) Mueller. Scott, the oldest of his siblings, was a confident and sensitive brother, who enjoyed camping with his family. He graduated from Shawnee Mission West High School and began his adult life by moving to Summit, New Jersey.

His career began at New Jersey Crankshaft, rebuilding engines for construction equipment. This is where his love for taking things apart, putting them back together, and working with his hands began to grow. It was here that he first met Tina, and when her job took her to Vermont in 1988, they decided to move together to the Green Mountain state. For those who knew Scott, it would be hard to think of a more fitting place for him to call home. Scott and Tina settled into life in Vermont, going hiking and swimming with their dog Auggie, and remodelling their home in Enosburg Falls. They started a family and have two beautiful daughters together.

Over the years, Scott’s work took him many places, but it always involved getting his hands dirty and developing a deep understanding of how things work. In Vermont, Scott began his career at Champlain Chevrolet, eventually moving to Triad Design Service Inc. to work as a technical writer in the aerospace industry. In 2012, Scott took a position with Sheldon Hydro, eventually transitioning to the Village of Swanton in 2014; making lasting friendships along the way. He was a highly respected member of his team, creating a model for how things should be done in his field. He brought his warmth, curious nature, and reliable work ethic everyday.

Beyond work, Scott was a person who belonged in the outdoors. Whether he was taking the family camping, skiing, canoeing, snow shoeing, or hunting, he was always looking for the next opportunity to be outside. He will be remembered for hikes to Sterling Pond, lengthy hunting excursions (and the occasional trophy to prove it), hiking trips to complete the Long Trail, turning on Prairie Home Companion every Sunday, and many other fond moments. Scott was also a skilled builder. It began with extensive renovations to the house in Enosburg Falls. He then built a cabin at his woodlot, and finally, he constructed his new house from the ground up. On all of these projects, he had help from many friends, who were very dear, and it meant so much to have these shared moments together. These buildings will leave a lasting memory of him reaching into the future alongside the people who were important to him.

Scott was also a wonderful father to his two daughters, Catherine (Mueller) Eisel and Sarah Mueller. He was one of their biggest cheerleaders, always championing their successes and telling everyone how proud he was of them. They will remember Sunday breakfasts, playing cards and having campfires at camp, and him always stealing their food. His unconditional love for his daughters is something they will always cherish.

He is survived by his daughters, Catherine Eisel and her husband Matthew Eisel of Mechanicsburg, PA, and Sarah Mueller and her partner Gonzalo Blasco Soro of Munich, Germany; the mother of his daughters, Tina Mueller; father, Donald Mueller of St. Albans, Vermont; sister, Kathy Weston and her husband, Monty Weston of Basehor, Kansas; brother, Joseph Mueller of Overland, Kansas; many other aunts, uncles, and other relatives; and many special friends, which are too numerous to list here, who shared life with him. Scott was predeceased by his mother, Patricia Mueller.

Family and friends are invited to Scott’s Life Celebration events on Saturday, May 14, 2022, to include visitation from 5:00-5:30PM, a memorial service at 5:30PM, and a reception immediately thereafter on the back lawn at The Goss-Spears Life Celebration Home, 96 Dickinson Ave., Enosburg Falls, VT 05450. Please bring a chair and a story to share.

To order memorial trees or send flowers to the family in memory of Winfield Scott Mueller, please visit our flower store.